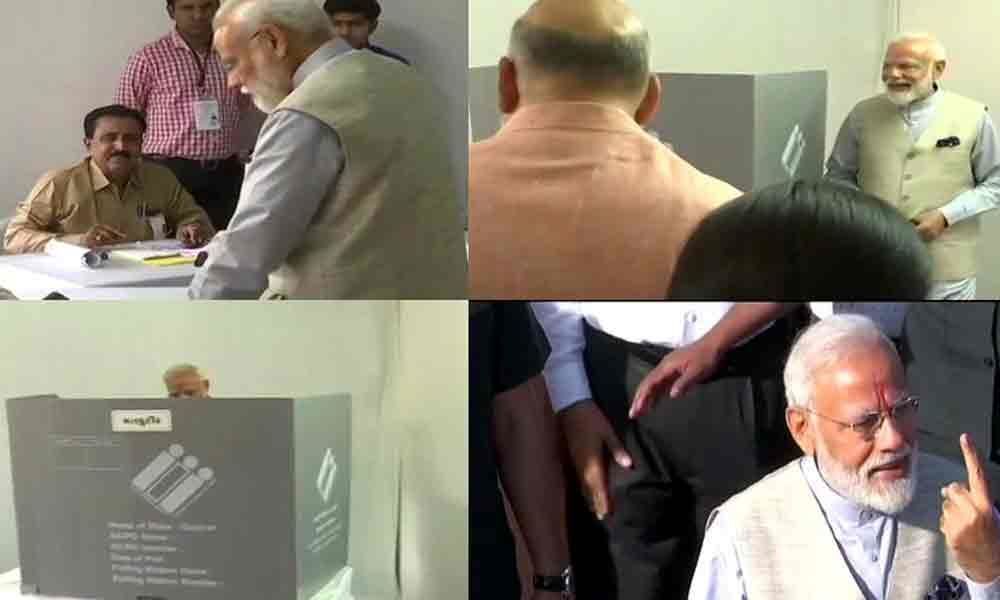 Prime Minister Narendra Modi on Tuesday said people must vote in large numbers as the power of the Voter ID is stronger than the IED (improvised explosive device) used by terrorists.

Ahmedabad: Prime Minister Narendra Modi on Tuesday said people must vote in large numbers as the power of the Voter ID is stronger than the IED (improvised explosive device) used by terrorists.

"Terrorists' weapon is IED while democracy's strength is Voter ID. I believe that the power of Voter ID is much more stronger than the IED. Understand the importance of Voter ID and vote in large numbers," Modi told the media after casting his vote here.

#WATCH PM Narendra Modi after casting his vote in Ahmedabad says, " The weapon of terrorism is IED, the strength of democracy is voter ID." #LokSabhaElections2019 pic.twitter.com/X0LBPI5qcu

Modi said voters of India were wise to decide whom to vote. "They know the difference between good and bad."

He said the feeling one gets after voting was akin to what one feels after the holy dip during the Kumbh.

The Prime Minister cast his vote at a polling booth in Ranip in Ahmedabad, a part of Gujarat's Gandhinagar Lok Sabha constituency, in the third phase of the parliamentary polls.

Bharatiya Janata Party (BJP) chief Amit Shah is the party candidate from this constituency, which was earlier represented by BJP veteran L.K. Advani.

Modi also asked the youths and first-time voters to exercise their franchise in the interest of the nation.

"I welcome the youths for their active participation in making a decisive government..."

Voting was underway on Tuesday across 117 Lok Sabha constituencies spread over 15 states and Union Territories as the third - and largest - phase of the seven-phase electoral exercise kicked off. All 26 constituencies in Gujarat are voting on Tuesday.