We need to work as one to defeat BJP and Modi: Gowda 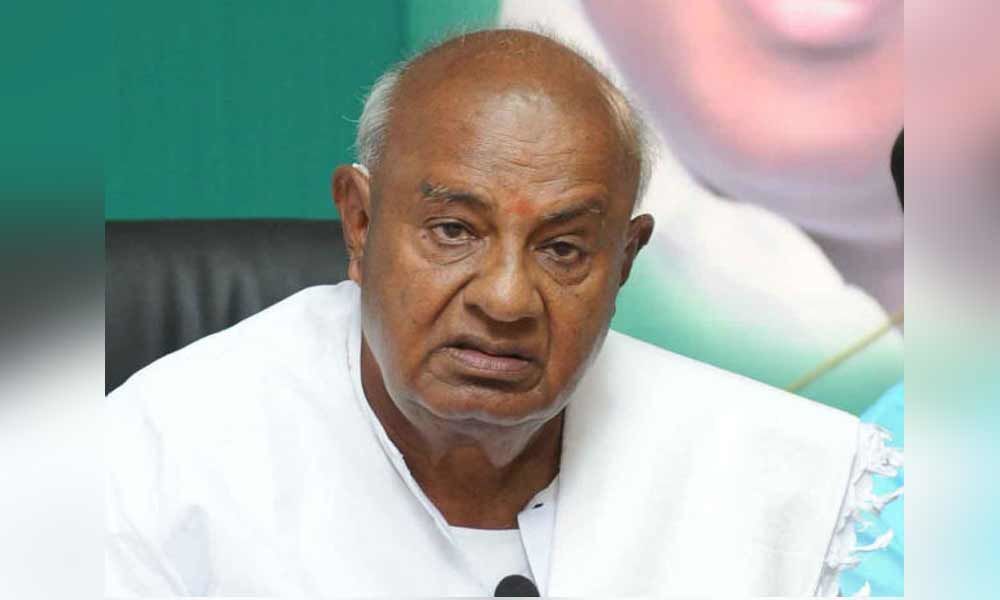 The Congress and the JD(S) held their first joint election rally in Bengaluru on Sunday under the leadership of AICC president Rahul Gandhi and JD(S) supremo HD Deve Gowda and all prominent leaders of the alliance.

The well-attended rally was prearranged at the insistence of Gowda, whose party is facing serious opposition from Congress cadres in Mandya, Tumakuru and Hassan from where he and two of his grandsons are contesting.

Rahul not only paid attention to Gowda's wishes and accommodated the Bengaluru gathering in his already-cramped schedule, but did exactly what the former Prime Minister wanted to tell Congress workers to put aside their difference and genuinely work for JD(S) candidates.

"This is an important election and I want all Congress leaders and workers to work for JD(S) candidates' wherever they are contesting," Rahul twice told the audience in his 30-minute speech in Hindi. He also asked JD(S) leaders to respond and guaranteed triumph for Congress candidates.

Gowda and his chief minister son HD Kumaraswamy made no bones of airing apprehensions of possible sabotage'. "We need to work as one to defeat BJP and Modi," Gowda said. "I wanted to send a message to the entire country like the one we convened in May 2018 when Kumaraswamy took oath as CM. This rally has been successful in this direction."

Gowda also took grave opposition to Modi telling the mahagathbandhan as 'mahamilavat'. "I am pained by his comments," Gowda said. "Media are also singing the same tune and painting opposition leaders as corrupt. We will prove them wrong after the elections," he added.

Kumaraswamy appealed to workers of both parties to bury their differences and work for coalition candidates. "Whatever differences there are in two or three seats, forget them. I beg you," Kumaraswamy said.

"The diary jottings indicate Yeddyurappa doled out a staggering Rs 1,800 crore to BJP leaders," Rahul said. "It says Rs 150 crore was given to Arun Jaitley, Rajnath Singhji, Gadkariji… Where did he (Yeddyurappa) get this money from? Whose money was it? It was Karnataka people's money," he questioned.