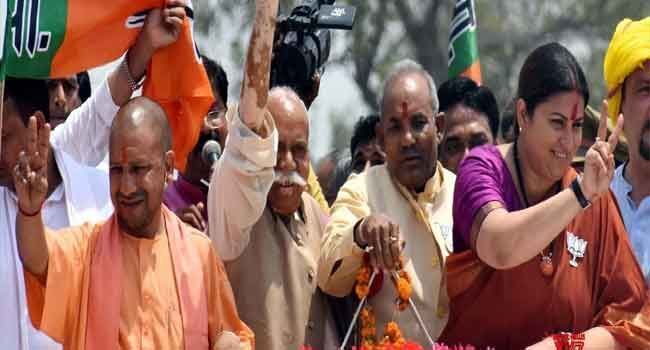 AMETHI (UP): On Tuesday, Chief Minister of Uttar Pradesh Yogi Adityanath will be campaigning in favour of Union minister and BJP nominee Smriti Irani for Amethi Lok Sabha seat.

It was said by the Sub-District Magistrate of Gauriganj, Amit Kumar, that a public meeting organised by the BJP at Maurya Ki Bag under Jagdishpur assembly segment would be addressed by the chief minister on Tuesday. The nomination procession of Irani had been attended by Adityanath before he left Amethi. Irani had contested in the 2014 Lok Sabha election from Amethi against Congress president Rahul Gandhi, in which she did not find favourable success. This time, she finds herself in the same position, against the Congress president again.

Amethi will go to polls on May 6. Traditionally, Amethi has been a Congress supporter. Excepting 1977 and 1998, a Congress candidate had always been elected in Amethi. In 1977, Sanjay Gandhi, son of then prime minister Indira Gandhi had been defeated by Janata Party candidate. However, he won the seat back in 1980. In 1998, Congress candidate and former Union minister Captain Satish Sharma had been defeated by BJP nominee and successor of Amethi royal estate Sanjay Singh. Later on, Singh joined the Congress and is currently contesting the ongoing Lok Sabha polls from Sultanpur as its candidate.