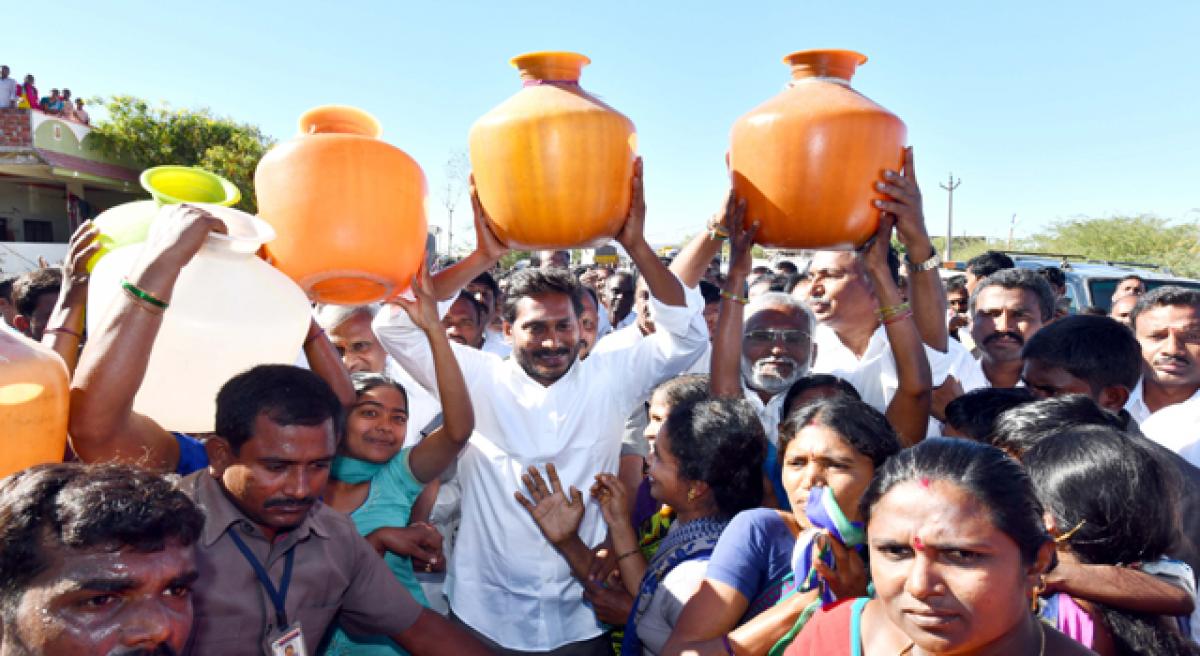 If the Union government believes what Chandrababu Naidu is announcing in the CII summit at Visakhapatnam, how can it announce Special Category Status to the state, questioned YS Jaganmohan Reddy.

Podili: If the Union government believes what Chandrababu Naidu is announcing in the CII summit at Visakhapatnam, how can it announce Special Category Status to the state, questioned YS Jaganmohan Reddy. Speaking at Podili in Markapuram Assembly constituency as part of the Praja Sankalpa Yatra on Monday, Jaganmohan Reddy alleged that the Chief Minister Chandrababu Naidu has no credibility.

The YSR Congress Party president YS Jaganmohan Reddy walked 13.5 km from Pedaarikatla to Podili on Monday, on his 98th day of padayatra. He was greeted by huge crowds of farmers, youth and women all the way and a number of people submitted petitions to him with their grievances. At Chinaarikatla, women brought empty plastic pots and urged him to help them get drinking water.

At the public meeting in Podili, Jaganmohan Reddy said that he noticed that many villages have been facing scarcity of drinking water in the constituency. He blamed the TDP government for not completing the Veligonda project yet. He flayed the Chief Minister Chandrababu Naidu for not paying the insurance premium for the Kharif season though the Rabi season is also about to complete. The state is cursed with drought for the past four years. But he is not taking any remedial measures to help the farmers get input subsidy and insurance for the crop loss.

He said that the Chandrababu Naidu kept changing his word on special category status and at last started to demand for it now. Responding to the claim of flow of crores of investments through hundreds of MoUs at the CII partnership meets in Visakhapatnam, Jaganmohan Reddy asked the public whether they witnessed any companies investing Rs 15lakhs crores in the state.

If the state gets Rs 15 lakhs of crores in the last two years as Chandrababu Naidu is claiming, how come we get the special category status, he questioned. He asked the TDP to join them to resign to the memberships in parliament if the Union government fail to didn’t announce it by April 5.