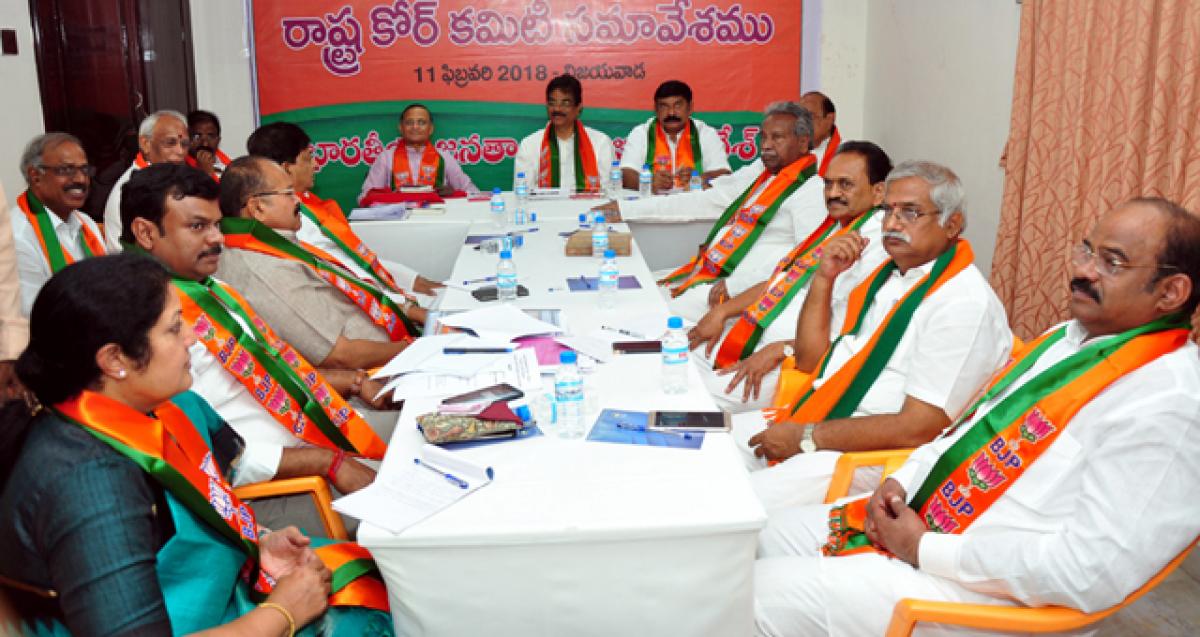 After the Telugu Desam Party pulled out of the NDA government, the BJP has decided to defend itself in the face of the continuous onslaught from its erstwhile ally that it was principal villain to Andhra Pradesh.

Vijayawada: After the Telugu Desam Party pulled out of the NDA government, the BJP has decided to defend itself in the face of the continuous onslaught from its erstwhile ally that it was principal villain to Andhra Pradesh.

To retrieve lost ground and set the record straight, the BJP now wants to match all the allegations of the state government with facts and figures and prove wrong its argument that the Centre had ditched the state.

The core committee meeting of state unit of BJP which met here on Sunday discussed the fall out of the exit of the TDP from the NDA government and assessed the political situation prevailing in the state after the state government had resorted a blitzkrieg attack.

The leaders pointed out that the Centre had taken decisions benefiting the state, but not enough light had been shed on them. The state government, they said, conveniently neglected revealing the details of Centre’s share in various development works and welfare schemes. The BJP leaders decided to explain to the people as to how much the Centre had helped the state.

BJP state president K Hari Babu took strong objection to the criticism of Telugu Desam that the Centre had not released funds liberally. Speaking to media-persons here on Sunday after completion of core committee meeting, Hari Babu said that the Centre has done several favours to the State.

Now the BJP would give wide publicity to those schemes. The Centre has fulfilled a majority of the assurances made in the AP Reorganisation Act. The remaining issues also would be resolved soon, he said.

The MP flayed the political parties especially the Telugu Desam for criticising the Centre even though it was not at fault. He said that no national institution was given under the United Andhra Pradesh but the BJP government allotted nine institutions during the last three and half years.

The Centre is actively taking steps to clear the railway zone, Kadapa steel factory, port and petroleum complex. The MP has also said the Centre has provided several benefits like funds for flyovers and missile manufacturing unit though they were not in the Act.

He said the Centre would release Rs 15,000 crore in next five years under special package. The Centre is also ready to help the state get loans from external agencies, he said.