Story on Akshaya from Kadapa 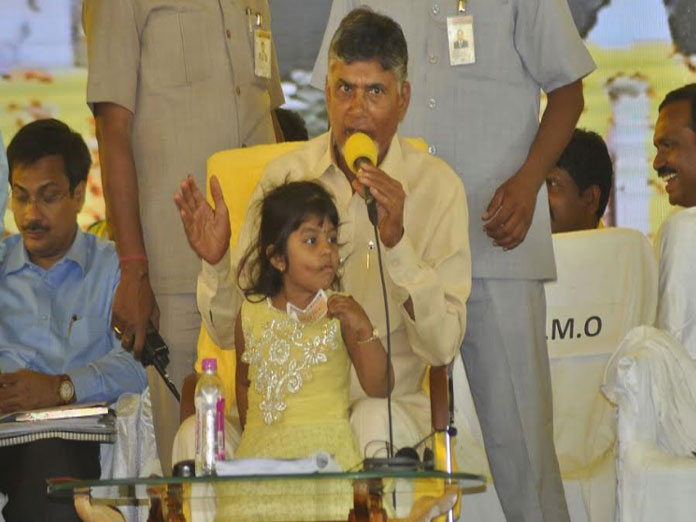 Will it possible for hardly three and a half year age girl can have by-had 108 Slokams with Sanskrit language in Sri math Ramayanam? Will it believable for the kid could disclose the names of ministers along with designations representing with Chandra Babu Naidu cabinet? But it is fact. If we want know about this Super kid blessed with extraordinary memory power we should definitely visit a small house located in Rajula colony of Rayachoti town.

Palla Askhaya daughter of P.Nirish Kumar Nirisha leave spell bound everyone in awe with her extraordinary talent. Not even completed four years the little girl can not only pronounce Sri Madh Ramayanam in 108 sentences but also can recite Bhagavadh Geetha 3chapters around 150 poems in the same language.
Ease not these two she also able to reveal the names of 24 internal lines which were designed in ‘Ashok Chakram’, and about 60 countries and their capitals in the world.

Chief Minister N.Chandra Babu Naidu who participated in the Janma Bhoomi-Maa Oovuru last year held at Dharma Varam of Ananthapur district last year stunned when she revealed that he was born on 20th April 1950 as first son of Narakarjura Naidu , Ammanamma in Naravari palle village of Chandra Giri mandal in Chittor district and got married with NTR daughter N.Bhuvaneswari in 1980.

CM astonished over her extraordinary memory when she disclosed the names of his cabinet ministers along with representing departments. When CM asked can any competed with Akshaya over issue but now answer from the public. Even Ananthapur district collector Veerapandyan also expressed inability to told names of cabinet ministers. When CM asked her what she want to become she simply replied that she wanted to become an IAS Officer.

He declared Rs 50,000 cash award on the spot to the super kid. “I feel proud for having such remarkable child in Andhra Pradesh. It is responsibility of the government to encourage such super kids’ he said.

When contacted by Hans India Jagadeswari said that she is planning to teach some part of Veda manthras in view of inducting her granddaughter name in Gunnies of world record. “Despite it this will be mammoth task and against male dominated society but I wanted to promote her in that aspect.” Jagadeswari said.