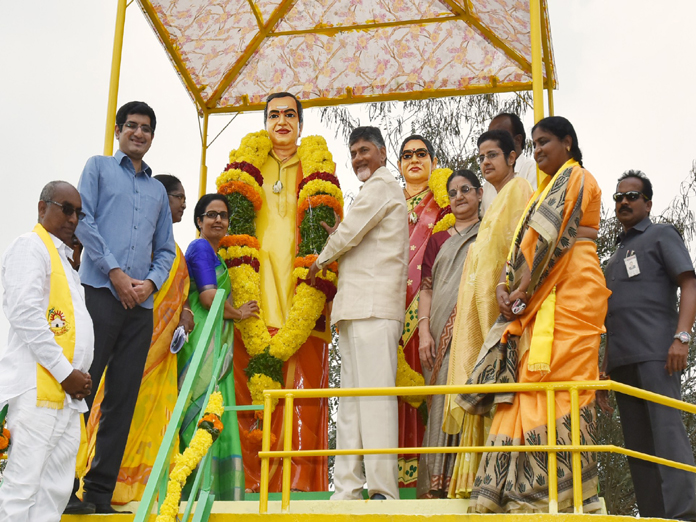 Chief Minister N Chandrababu Naidu said that the State government would introduce new scheme for welfare of farmers He visited Komaravolu village in Krishna district along with his wife Bhuvaneswari, who adopted the village, and inaugurated several development works

Vijayawada: Chief Minister N Chandrababu Naidu said that the State government would introduce new scheme for welfare of farmers. He visited Komaravolu village in Krishna district along with his wife Bhuvaneswari, who adopted the village, and inaugurated several development works.

Speaking on the occasion, he said the farming community including tenant farmers would derive benefit from the new scheme. He said that he had introduced various welfare schemes and several development works in the State. He reiterated that Amaravati capital city would be among the top 10 cities in the world.

The Chief Minister also said that the farmers of Amaravati gave 33,000 acres land for capital construction under land pooling. The land pooling scheme is model to various States and countries, he said and added that the government would construct the world’s best capital city with farmers’ support.

Naidu said that the government completed Pattiseema Project before the completion of Polavaram Project. The government released Godavari waters to the farmers of Krishna delta to protect their crops as there was no sufficient water in Krishna river. He described it as a significant achievement.

The Chief Minister congratulated the villagers and his wife Bhuvaneswari for developing Komaravolu village by taking up various development works. He said that the villagers banned liquor and smoking in the village and set an example to other villages.

The village also received 10-star rating. Other villages in the State should register similar progress, he said and added that the government’s aim is to develop all villages in similar lines. He called upon the people not to ignore their native villages though they are currently residing at various places across the globe.