Made exclusively for the Chinese market, the BMW 1-Series sedan has been photographed for the first time without disguise. This is the sedan avatar of...

Made exclusively for the Chinese market, the BMW 1-Series sedan has been photographed for the first time without disguise. This is the sedan avatar of the BMW 1-Series hatchback, which is going to be a global product. The sedan is BMW's attempt to challenge the Audi A3and the Mercedes-Benz CLA, which have been gaining popularity in several markets, including India. It was first showcased as the 'BMW Concept Compact Sedan' at the Auto China 2016 and will make its global debut in November at the 2016 Guangzhou Auto Show. The BMW 1-series sedan shares its platform with the MINI line-up, a subsidiary of the BMW group. Engine wise, the car gets a 1.5-litre turbocharged petrol and a 2.0-litre turbocharged petrol engine. These together make up three models - 118i with the smaller engine, the 120i and 125i with the bigger motor. The 118i produces 137.8PS of power whereas the 120i and 125i produce 194.6PS and 234PS, respectively. In terms of features, the sedan comes with dual tone ORVMs, LED headlights, heads-up display, sunroof and nine different types of 16, 17 and 18-inch alloy wheels. 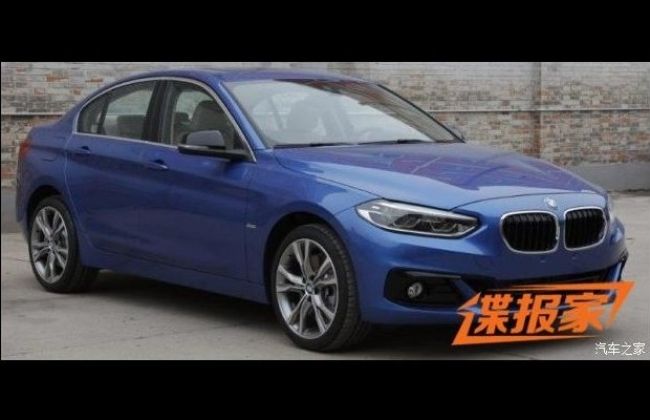 During the unveiling of the concept, BMW said, “1 Series Sedan will be equipped with BMW ConnectedDrive technologies that provide customers unparalleled convenience, rich infotainment, and significantly enhanced safety. The sedan will be based on the UKL1 platform that underpins all the new Minis and the X1 crossover. This also means that the sedan will be front-wheel-driven and it is expected to get a range of three and four-cylinder petrol as well as diesel engines.”

As of now, there is no further information about the sedan and whether it will feature diesel engines or not still remains a mystery. Also, the possibility of this sedan entering India is slim, but looking at the success of the CLA and A3 sedan, BMW might be tempted to bring this car to Indian shores.