The ninth generation of the Audi A4 has been launched in the country today. This luxury sedan comes with just one petrol engine option in two 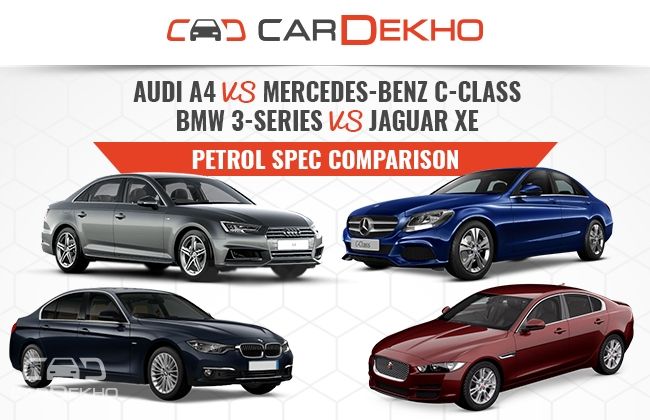 The ninth generation of the Audi A4 has been launched in the country today. This luxury sedan comes with just one petrol engine option in two variants. This news affects the A4's rivals from its own country and one country away – the German BMW 3 Series and Mercedes-Benz C-Class and the British Jaguar XE. To be precise, we are talking about the BMW 320i, Mercedes-Benz C200 and the Jaguar XE (200PS) and the Audi A4 that has been launched in its 30 TFSI guise. Let's have a closer look at the specifications of the above-listed cars and see which of them has the most to offer.

Clearly, the Brit is the most powerful of the lot. Despite this being the less powerful variant of the Jaguar, it has 200PS power and 320Nm of torque – 16.5PS more than the BMW 320i and Mercedes-Benz C200 – each of whom has 183.5PS under its hood. The Audi A4 30 TFSI turns out to be the least powerful model in this category with the smallest engine pumping out 150PS power and 250Nm torque. The Merc and the Audi both employ a seven-speed automatic transmission whereas the Jag and the Bimmer use an eight-speed auto to shift gears. As a result of the above combinations, the 3 Series is the quickest to 100kmph in just 7.2 seconds and the XE is the fastest with a 237kmph top speed. Where the Audi scores the most – courtesy of the smallest engine displacement – is the mileage. It claims a fuel efficiency of 17.84kmpl, whereas the C-Class, 3 Series and the XE each returns 14.7, 17.61 and 13.06kmpl, respectively.

There is no clear winner here since each of the cars serves a different purpose. The 3 Series is the quickest car and the XE is the fastest. The Audi is the slowest car but has the best fuel economy. The C-Class is a blend of the three, scoring some points in each aspect.

As far as space is concerned, on paper, the Jaguar is the most comfortable sedan as it is the longest and the widest; but it has the smallest boot (455 litres). All the others have a 480-litre boot with near-identical space in the cabin. All the German entries – the A4, C-Class and 3 Series – compete closely in terms of comfort, but among them the C-Class offers the most legroom for the passengers at the rear leading to a more comfortable ride. The BMW is a more driver-oriented car and is set up accordingly. The A4, on the other hand, is tuned to be comfortable for both the driver and the passenger. We will have a more detailed comparison for you when we get them together for head-to-head review.

In terms of features, all the cars are pretty well-balanced. All of them have an electric sunroof, large display for car information, and infotainment systems, park assists, drive modes, climate control and electronically adjustable seats. In addition to all this, the A4 has a phone box with wireless charging for your smartphone. Also, the Audi has eight airbags for passenger safety – the highest compared to the C-Class's seven and the BMW and Jaguar's six.

All of these cars are drenched in features, have a lot of cabin space, and are comfortable city and highway drives. A clear winner cannot be called out on the basis of the features mentioned above, and the outcome will depend on what you expect from your Rs 40 lakh sedan. The BMW is built for a true blue driving enthusiast, the XE for the flamboyant kind, and the C-Class and A4 are more balanced family sedans. Stay tuned for a comprehensive head-to-head review.

Gold, silver price hiked in Hyderabad, other cities on January

House proceedings: Assembly to discuss on Raithu Bharosa and...