Will 'Not In My Name' protests leave a long-lasting impact? 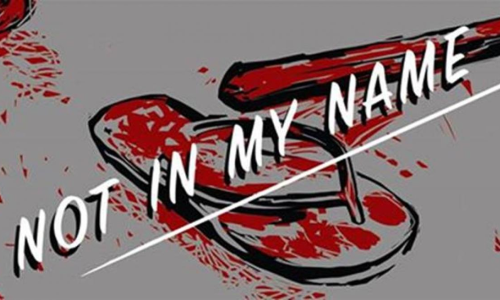 The #NotInMyName protest which is being taken up across the country is the demonstration by citizens against incidents of lynching of Muslims and Dalits.

The #NotInMyName protest which is being taken up across the country is the demonstration by citizens against incidents of lynching of Muslims and Dalits.

In a recent such incident, 16-year-old Junaid Khan was stabbed to death in Ballabhgarh, Haryana. He was killed by a mob who called him a beef eater over an argument on train seats escalated.

Two of Junaid's brothers were also injured in the incident.

The lynching and murder of Junaid Khan has led a nation-wide uprising. While the protests were originally planned in Jantar Mantar, Delhi but the idea spread across online garnering a huge response enough to replicate in other cities.

The protests spontaneously swept the country including Dakhinapan premises in Kolkata, Civil Lines in Allahabad, Sector 17 in Chandigarh, Gandhi Nagar in Jaipur, Kargil Chowk in Patna, Tank Bund in Hyderabad, Bangalore Town Hall in Bengaluru, Promenade on the Carter Road in Mumbai, Gandhi Park in GPO in Lucknow, High Court Junction in Kochi and near the Secretariat in Thiruvananthapuram.

However, this protest was not confined to Indian cities, alone as protests also took place in other parts of the world, including Boston, London, and Toronto.

The protests are being helmed by Gurgaon-based filmmaker Saba Dewan who called out for the public conscience in a Facebook post, “Shouldn’t there be protests against the lynchings especially after the murder yesterday in Delhi NCR by a mob of a 16-year-old Muslim boy? If not now then when? Why wait for political formations to organize a demonstration? Why can’t all of us as citizens repulsed by the violence get together in protest at the earliest next week at Jantar Mantar under the banner – Not in my Name.”

The 'Not in My Name' protests are staged to question the pattern of attacks on the minorities in the country and the reason behind the silence of the government on the issue.

Actors Dia Mirza, Arjun Kapoor and Aditi Rao Hydari and director Hansal Mehta too extended their support in the cause where they denounced the killing of innocent people in the name of religion and cow protection.

The 'Not In My Name' protests received a massive boost on Monday when hundreds were seen in attendance at Dadar West in Mumbai to voice their support. Several prominent personalities such as Shabana Azmi, Konkona Sen Sharma, Girish Karnad, Sonam Kapoor, Kalki Koechlin, Ranvir Shorey, Nandita Das and Varun Dhawan supported the cause.

Prime Minister Narendra Modi finally broke his silence on the subject and spoke against the ‘beef lynchings’. Speaking at Gandhi's Sabarmati Ashram in Ahmedabad, the Prime Minister made a statement that killing in the name of cow protection was not acceptable and made an appeal for non-violence.

However, day after the PM Modi's statement, yet another Muslim was murdered.

The lynchings have put a blood-stained stigma on India with every year such incidents taking place. In 2015, Mohammad Akhlaq, father of an Indian Air Force personnel was killed by a mob on suspicion that beef was kept in his house in Dadri, on the outskirts of Delhi.

Responding to the incident, PM Modi had offered platitudes for Hindu-Muslim harmony but it was repeated once again in 2016 where seven Dalits were beaten up by cow vigilantes.

The Modi government has already faced a series of protests from students, Jats, Marathas, Dalits, farmers and Patidars. Not in My Name is the latest in the protests which is gaining a prominent foothold across the country spreading only with the power of social media.

While the agenda succeeded in the 'Nirbhaya' sexual violence protests and the Lokpal agitation, it is to be seen whether Not in My Name agenda gets accepted.