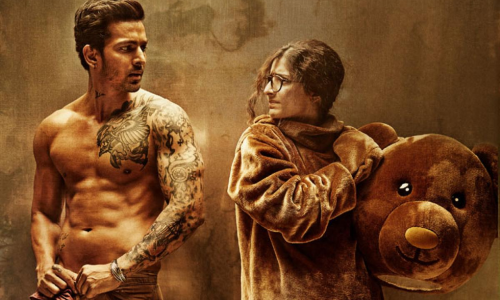 It is understandable if the script somewhere gives the girl one defining moment of self- respect and dignity like Jaya squeezes in Silsilla or KKKG. No consolatory gravitas. This is Women Empowerment gone wrong.

This is Jane Austen meets Robin Sharma, Saira Banu meets Tabu. This is the kind of retrograde tear jerker that labours on ‘story value’ with a social currency in the sixties with the likes of Meena kumari and Mala Sinha willing to sob their way through nearly three hours of insults, rejection and abuse. Woefully in conflict with the audience, these 150 odd minutes is an endurance test and a colossal waste of time. What, in the first place will a filmmaker have to stretch his tale to 150 minutes? Why would he (read they) consume stock for a banal tale who is out making an over stretched script of a fairness cream advertisement? That the filmmakers (Radhika Roy and Vinay Sapru) are not rich on creativity is obvious that they do not have an original title to a tear jerking boy loves girl story.

It is understandable if the script somewhere gives the girl one defining moment of self- respect and dignity like Jaya squeezes in Silsilla or KKKG. No consolatory gravitas. This is Women Empowerment gone wrong. Plain Jane Saraswati (Mawra Hocane) is repeatedly rejected by suitors while Dad Jayaram Parthasarthy (Manish Chouhan) is eager to have an IIM, IIT son-in –law. Saru the bespectacled girl is not just losing out in the matrimonial market but has negative confidence and a huge inferiority complex. Adding insult to injury is sibling Kaveri (Divyetta Singh) whose waiting boyfriend is losing out on patience. He has kept his marriage and impending trip to USA on hold for a while. Dad is working overtime to get the IIT IIM combo as the son in law for the waiting daughter. Alongside them in the apartments lives Inder (Harshavardhan Rane) an ever sozzled, over sexed guy who is smooching and hugging gals in the common area of the apartments – that is when he is not doing his work outs in his pad with trousers borrowed from John Abraham in Dostana or helping the liquor industry stay afloat.

Meanwhile Inder helps Saru with an image change with the assistance of local magician Vijay Raaz and gets her colleague Abhimanyu (Anurag Singh) interested. Saru who has all along been waiting for the proposal accepts it without hesitation. Just time for Prof. Higgins to chuckle and make an exit you would think but there is just too much ‘story’ brewing with our film maker(s). So we have the love triangle, we have huge borrowings from films like Prem Geet and Aakhiyon ke Jharokon Se. We have hospital runs and drama leading to seemingly high voltage drama. It is a drama that refuses to take off.

Central to the story is Mawra Hocane who simply does not have the soul to carry the burden of a tear jerking script. Manish Chaouhan strives hard to play the south Indian father. Murali Sharma is wasted in a role of a police officer who is out staking the lovers. The one person who bares his all is Harsha Vardhan Rane who puts in a very sincere and decent effort. Wonder if the footfalls will be enough for the makers to return to his doorstep but at least the guys down here would see that he has enough talent and give him the attention he deserves.