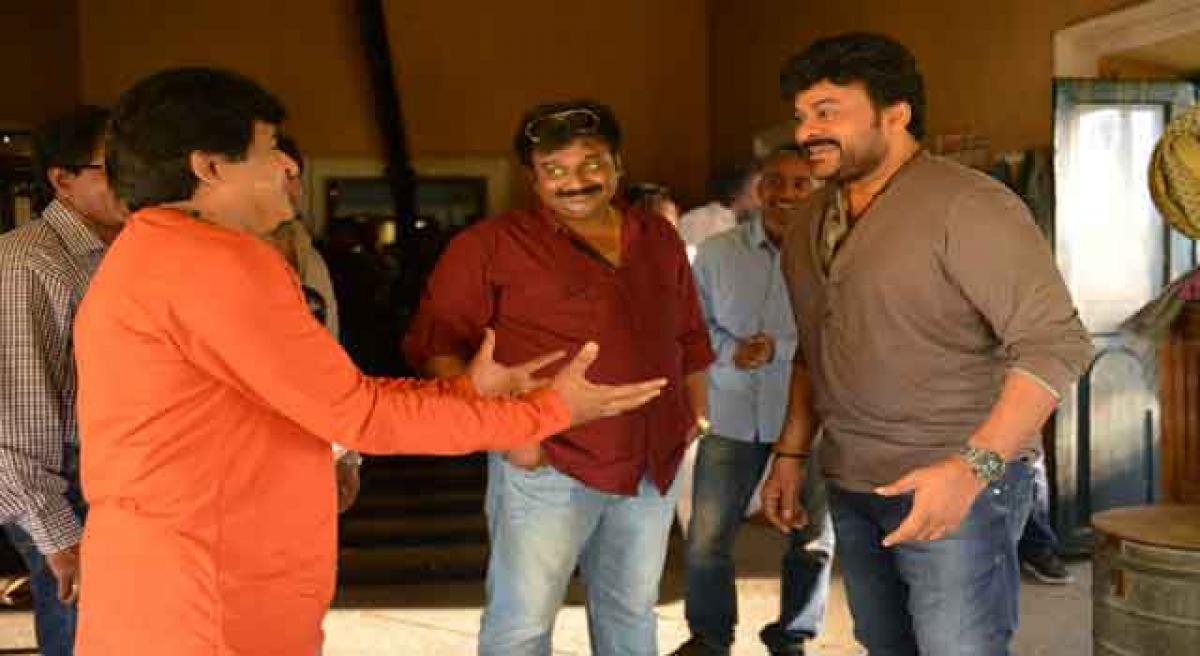 For all the “mega fans”, the wait is over. Launched in the last week of April, Chiranjeevi’s yet-to-be titled 150th film, a remake of Tamil super hit ‘Kaththi’, has gone on floors on Thursday in Hyderabad.

​Hyderabad: For all the “mega fans”, the wait is over. Launched in the last week of April, Chiranjeevi’s yet-to-be titled 150th film, a remake of Tamil super hit ‘Kaththi’, has gone on floors on Thursday in Hyderabad.

Accompanied by brother-in-law Allu Aravind, Chiru participated in the shooting dressed in a cool tee and a pair of blue denims. Director VV Vinayak is presently filming talkie portions involving the matinee idol and Ali.

The schedule will go on till July 12 in and around Hyderabad. The film is likely to be released by Sankranthi. A special set has been erected by Thota Tharani in Hyderabad. The Telugu version of ‘Kaththi’ has been written by the Parachuri Brothers.

Chiru’s son Ram Charan is producing the film under his newly-floated banner Konidela Productions for which Vinayak wields the megaphone. The makers have approached Anushka for the female lead, but she has not yet confirmed as she is busy with a few projects.

Vinayak said the film’s sequences are designed in a way that they would be appreciated by mega fans and general audience alike. “Chiranjeevi is in best shape and the audience will drool over him once the film releases. The current schedule will be followed by a bigger one in which the heroine will enter.

The film will be a typical Chiru entertainer with all elements — comedy, action and fights — in equal measures. He will be playing a leader fighting for the cause of farmers. We will be unveiling a teaser with Chiru’s new look shortly,” he said and added that the film’s title too will be declared shortly.

Ace technicians like Rathnavelu (cinematography), Devi Sri Prasad (music), Gowtham Raju (editing) and Thota Tharani (art) are on board for the film, which is being planned for an early 2017 release.