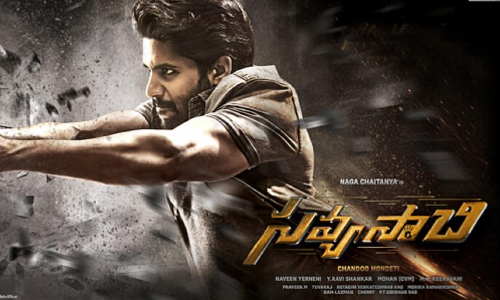 With the changing trend in Tollywood, we have been seeing some outofthebox kind of scripts these days and Savyasachi is exactly one such film With a unique concept of Vanishing Twin Syndrome, the movie is the first of its kind

With the changing trend in Tollywood, we have been seeing some out-of-the-box kind of scripts these days and 'Savyasachi' is exactly one such film. With a unique concept of Vanishing Twin Syndrome, the movie is the first of its kind.

Akkineni Naga Chaitanya whose previous outing 'Sailaja Reddy Alludu' ended up as a disaster is starring in this movie. Chandoo Mondeti who previously directed Chai's 'Premam' movie helmed this project.

Launching a new beauty Nidhhi Agerwal, the 'Savyasachi' made a grand worldwide release today. Let's check out the review of the film.

Vikram (Naga Chaitanya) is born with Vanishing Twin Syndrome and his left hand will be controlled by his twin brother. When life is going smooth, Vikram received a huge shock from a person (Madhavan).

What did this unknown person do to Vikram? How did Vikram trace the unknown person to save his family? What happens in the end? Forms the story of the movie.

Naga Chaitanya has been an eye-feast in the film. His energetic performance is one of the driving factors behind this film. Chai sported a new look in this film when compared to his previous flicks and has given his career-best performance.

In both action scenes as well the romantic scenes, his performance is simply superb. Madhavan is undoubtedly one of the finest actors in the South and he definitely is one of the major assets for the film. His performance in the antagonist role is top notch.

Nidhhi Agerwal made her Tollywood debut and she looked absolutely gorgeous in the film. Her chemistry with Chai worked out really well. Bhumika Chawla did a great job.

She has lent dignity to the character. Vennela Kishore is impressive. His light-weight comedy will bring laughter in the theatres. Rao Ramesh also delivered a decent performance. The rest of the cast made their presence felt.

Chandoo Mondeti has shown a different angle in him. He handled the script like a pro and succeeded in maintaining the suspense till the end of the film. He not only explained everything about the syndrome but also weaved an intriguing thriller story with it.

He has proved his directional skills once again with this movie. Mythri Movie Makers is known for their rich production values and 'Savyasachi' is no exception in that.

The music scored by MM Keeravani is pleasant. Especially his BGM during the action sequences will be the highlight. Visuals are stunning by cinematographer J. Yuvaraj. Kotagiri Venkateswara Rao is a veteran editor and his experience worked out big time for this film as there are no draggy or unnecessary scenes in the movie. The runtime is crisp.

The first half of the film is not that great. The movie starts on an interesting note. The first 20 minutes of the movie is gripping but the love track, college comedy scenes are not that well narrated.

The episode where the conflict happens between Naga Chaitanya and his alien twin is well-written. The first two songs are good and pleasant. The placement of 'Ninnu Chusinadi' song is average. But the first half could have been much better.

The pre-interval bang is intriguing. The second half is good when compared to the first half. Overall, 'Savyasachi' is an well-narrated and well-acted drama with a few shortcomings. If you can handle slow narrations, then 'Savyasachi' is a good pick for you.