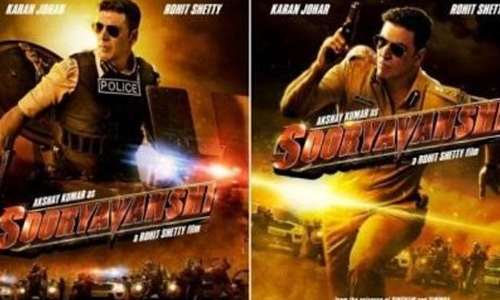 First ever collaboration of filmmaker Rohit Shetty and superstar Akshay Kumar is titled Sooryavanshi, gets its poster release by none other than Gully Boy actor Ranveer Singh

First ever collaboration of filmmaker Rohit Shetty and superstar Akshay Kumar is titled Sooryavanshi, gets its poster release by none other than Gully Boy actor Ranveer Singh.

The fans got the glimpse of Sooryavanshi in super hit Simmba, and now the film is out with its poster. Actor Ranveer Singh took to his social media profile and dropped two posters of the cop universe created by Rohit Shetty.

He captioned it, “A Bullet for a Bullet...He’s not alone...#Sooryavanshi @akshaykumar #RohitShetty @karanjohar @RelianceEnt @RSPicturez @DharmaMovies #CapeOfGoodFilms”
Needless to say, Akshay Kumar fits the uniform and add some swag to new kind of “bullet for bullet” cop on the poster.

Directed by Rohit Shetty, Sooryavanshi is a spin-off of Ajay Devgn's Singham and Ranveer Singh's Simmba and is a part of the Rohit Shetty's Singham universe. The poster features Akshay Kumar in action and we must say it's good to see him back in the police uniform.

Akshay Kumar appeared in the climax of Simmba, in a cameo as ATS chief Veer Sooryavanshi. In the short sequence, Akshay's character was seen talking on the phone with Ajay Devgn's Singham. And what makes this movie more exciting is that it is releasing on Eid 2020.