A decade on TTD female barbers make a mark 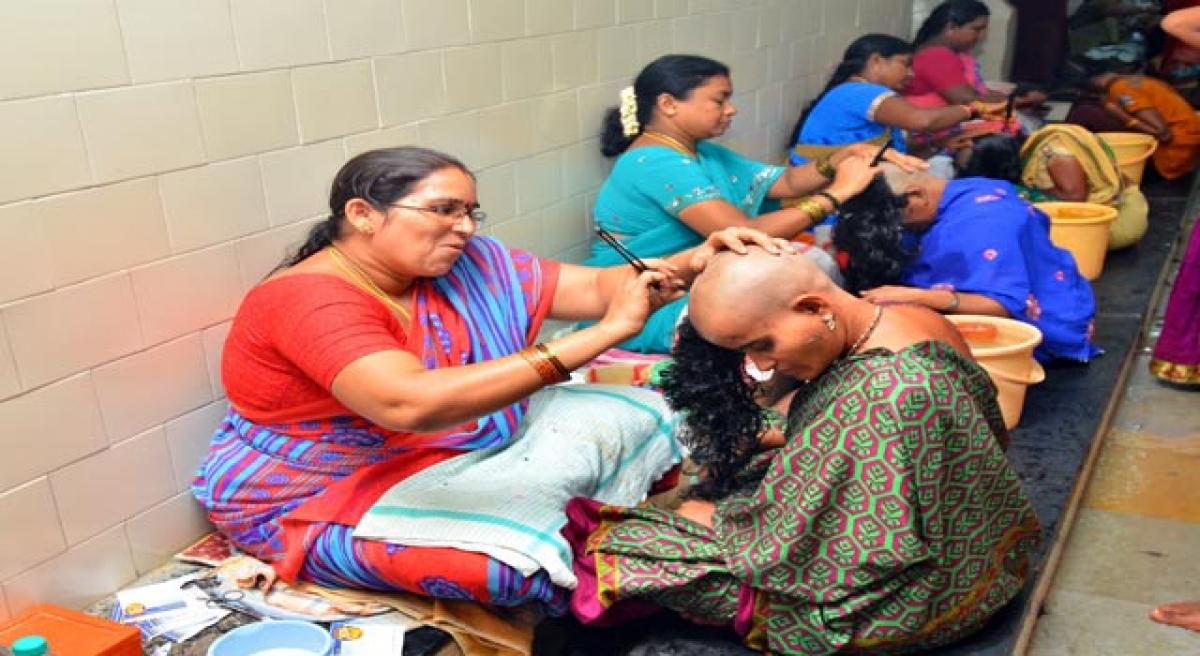 The introducing of female barbers to work in Tirumala Tirupati Devasthanams (TTD) tonsure centre known as Kalyana Katta in Tirumala, ten years back raised many an eyebrow while some unable to digest the women entering the profession even approached High Court to stall the move in vain.

The introducing of female barbers to work in Tirumala Tirupati Devasthanams (TTD) tonsure centre known as Kalyana Katta in Tirumala, ten years back raised many an eyebrow while some unable to digest the women entering the profession even approached High Court to stall the move in vain.

Despite stiff opposition from various sections including religious personalities, a batch of 60 women barbers after successfully passing through various tests conducted by TTD started working in Kalyana Katta in September 2006 following the TTD trust board headed by T Subbarami Reddy brave decision to appoint female barbers for tonsure service to devotees visiting Tirumala.

Now a decade on after female barbers started working in TTD Kalyana Katta they proved their mettle breaking the shackle of the prejudice that the service is a prerogative of men. Further, the women barbers proved that their service in TTD Kalyana Katta is indispensable as the women devotees who desire to get their head tonsured in Kalyana Katta, as a token of fulfillment of their vows, preferred women barbers. They even do not mind waiting some more time instead of male barbers tonsure them.

This saw TTD increase the number of female barbers step by step taking their number to about three hundred now proving beyond doubt that the female barbers will stay along with the male barbers in the completion of the age old ritual of tonsuring. A major chunk of devotees (30000 daily including about ten thousand women and children) visiting Tirumala still follow scrupulously tonsuring their head before they have a darshan of Lord.

Srilatha, a thirty-year-old woman from Repalle said she was completely at ease while the female barber shaving her head. ``When I was a young girl, I even hesitated to get my head tonsured by a male barber during my pilgrimage to Tirumala’’ the woman said. Another woman, Sandhya from Karimnagar, Telangana who brought her three year old son for tonsuring in Kalyana Katta said female are better for tonsure service to women and children more so infant.

Lactating mother feel convenient with female barbers for tonsuring the infants. Many women echoed the same view and hailed TTD engaging female barbers and providing separate space for the service of women and children in Kalyana Katta and also outside in the tonsure centres in pilgrim amenities complexes and guest houses in Tirumala. Even the officials are all praise for female barbers.

A senior official said “they are most obliging, duty minded and good at service and we receive no complaints about them from devotees’’. However, service in Kalyana Katta is not a bed of roses for the female barbers as they lack facilities in the work place. Pushpa a female barber said they direly need of facilities like drinking water, toilet and lockers. “ We are facing difficulty in keeping our belonging safe and also changing dress before resuming duty’’ she averred.

Pushpa one among the first batch 60 female barbers joined duty in TTD service in 2006 said though they are serving the devotees of the Lord, they have no facilities on par with regular TTD employees, particularly medical, though they face health risk involved in shaving as they come into contact with people with hair and skin diseases The women barbers are in two categories – Piece rate (first batch 60) and the remaining as Srivari sevakulu both are paid Rs 11 per head but Srivari sevakalu have no facilities at all, while piece rate barbers get transport facility.

A female barber Neeraja said two things will come to mind, the moment anyone mentions Tirupati – one is laddu prasadam and the other is gundu (tonsure). But we, engaged in tonsure get paid just Rs 11 per head. In other words we could make around eight thousand monthly provided if we work for 25 days (leaving five days menstrual period during which they will be away from duty respecting age old tradition and sentiments). In this they have to pay about two thousand rupees for transport.