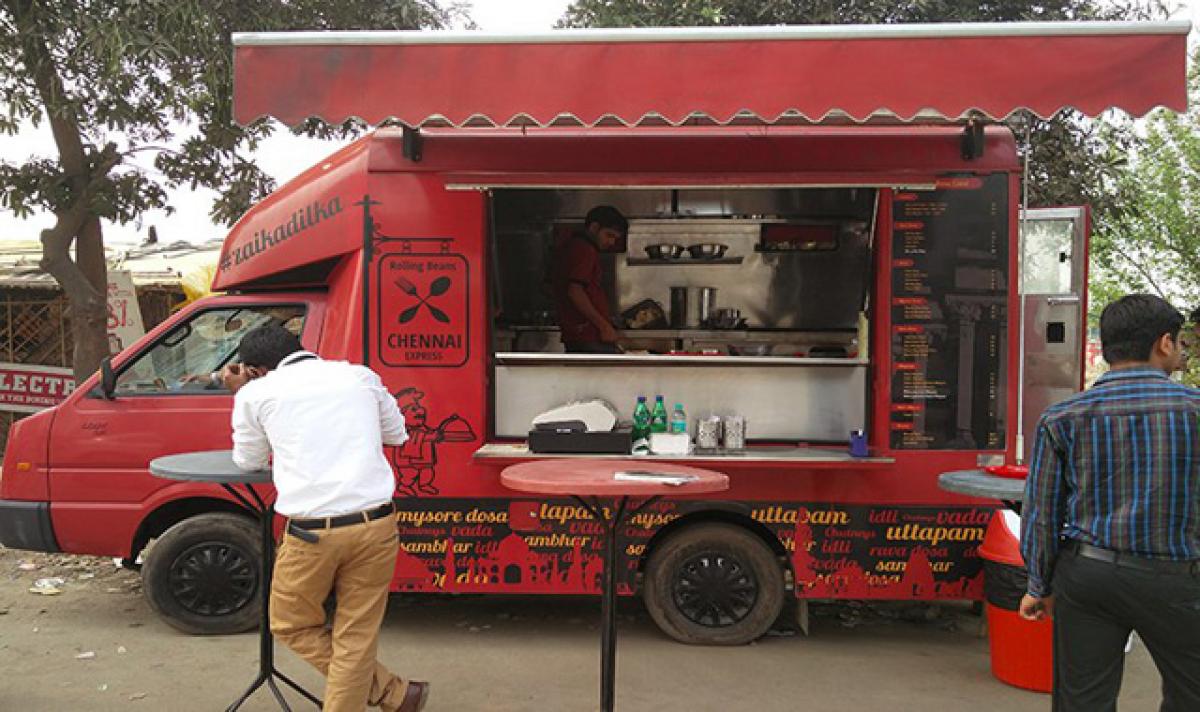 The food truck trend is on a high. After the quirky, colourful and mobile food-on-wheels concept began catching on at different spots in various cities, food truck festivals and reality TV shows have become the order of the day.

The food truck trend is on a high. After the quirky, colourful and mobile food-on-wheels concept began catching on at different spots in various cities, food truck festivals and reality TV shows have become the order of the day. Live kitchen makes food trucks a cleaner option not to miss the open air feel. But what makes food trucks appeal more to the youth is the fact that there's no geographical limitation and they offer pocket-friendly menus too. Saurabh Khanijo, Managing Director of restaurant chain Kylin, feels that the concept is very "efficient and has scalability".

"It allows brands to showcase their product in the best way possible. As food trucks don't have geographical limitations, one can send them anywhere. Brands can easily see the difference between setting up a restaurant and a food truck. The concept is quirky and way cooler than a restaurant today. It is also a great way to introduce oneself to fresh new consumers," Khanijo told IANS.

Osama Jalali, owner of The Masala Trail which has a food truck in Noida near Amity University, feels every city is booming with concept food trucks as they are a great platform to showcase a brand to the common man."It's a great market as one can see the mushrooming of food trucks around. Also the crowd at food truck festivals is crazy," Jalali told IANS, adding that he plans to expand his food truck outlets in the national capital region soon.

In Delhi, food truck concepts which serve up multiple cuisines have come up in creative ways. Just last month, the capital hosted the Delhi Food Truck Festival a two-day food extravaganza that brought together an array of local, national and international cuisines served by top food trucks in the NCR region.

Organised at the Jawaharlal Nehru Stadium, the food festival was a perfect blend of scrumptious food coming from more than 50 stalls along with soothing music, shopping stalls, live band performances, radio jockey and celebrity talks, and stand-up comedy acts to bring life to the festival and thereby becoming the hub for youth. The concept is reaching out to different tier cities too.

"The food trucks are trending in metro cities like Bengaluru, Delhi and Mumbai and gaining popularity. Now they can be found also in the suburbs of these cities like in Gurugram and Ghaziabad. "There is a lot of potential in the business due to its live kitchen... a study says that trucks are cleaner than local restaurants because of live kitchen.

Also, the trucks have a specific and specialised menu due to space constraints, which makes the food more authentic," Prachi Goel, who is managing Gurugram-based Spacedog Hotdog Food Truck, told IANS. Richa Kharbanda, owner of Quirky Perky, a food truck that is going to be launched in the next 10 days, feels that such a concept is booming in India because it "involves less investment compared to the typical static cafes".

"Secondly, it is a direct connection with the target audience. It is basically a cool way to cater to their needs. Now, with a conscious mind, we want hygiene and the food industry definitely needs that. Food trucks these days do take care of cleanliness and quality along with quirky designs and themes," Kharbanda told IANS. This trend is not just catching the attention of some known hotel chains around the country but also celebrities.

Popular TV show host and video jockey Mini Mathur is part of the "Mini Food Truck", a web series available on the India Food Network, where celebrities join her to cook up delights. Actress Katrina Kaif joined her to make some yummilicious pancakes.

Also, chef Ranveer Brar has turned host for Living Foodz's food truck reality show "Femme Foodies", which promises to explore the concept of "gourmet on wheels". "I strongly believe that food trucks are here to stay and will definitely gain popularity going forward. They are versatile and can easily adapt to any cuisine, culture and destination," said Brar.