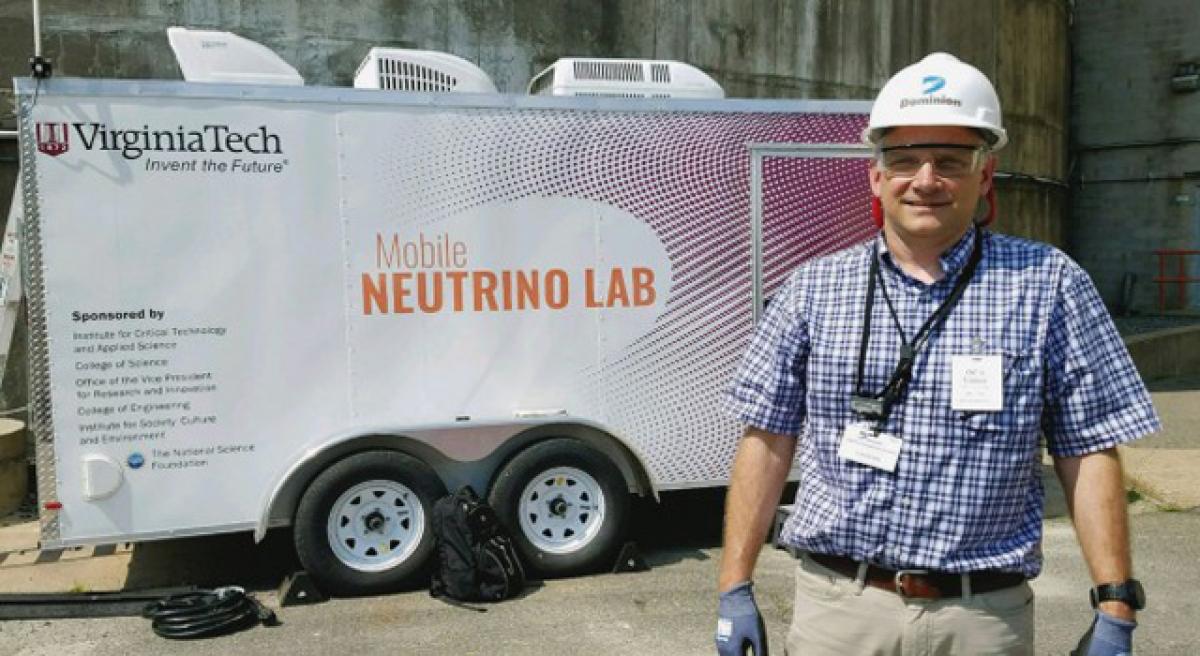 Researchers at the Virginia Tech College of Science are carrying out a research project at Dominion Power’s North Anna Nuclear Generating Station in Virginia that could lead to a new turning point in how the United Nations tracks rogue nations that seek nuclear power.

Researchers at the Virginia Tech College of Science are carrying out a research project at Dominion Power’s North Anna Nuclear Generating Station in Virginia that could lead to a new turning point in how the United Nations tracks rogue nations that seek nuclear power.

The years-long project centers on a high-tech box full of luminescent plastic cubes stacked atop one another that can be placed just outside a nuclear reactor operated by, say, Iran. The box would detect subatomic particles known as neutrinos produced by the reactor, which can be used to track the amount of plutonium produced in the reactor core.

It is plutonium the key ingredient in nuclear weapons that U.N. regulators seek to track in all nations that are party to the Nuclear Non-proliferation Treaty, but particularly in nations seen as volatile. The Virginia Tech team calls the box “tamper proof” and says if successful, can all but eliminate instances of falsified paperwork or uneasy inspection visits.

“If they want a nuclear reactor, we can let them build it and detect its activity with a minimal impact on its operations,” said Jonathan Link, a professor in the Department of Physics, part of the College of Science. Link views nuclear energy as an important part of a new worldwide low-carbon future that nevertheless requires careful oversight from all participating nations to ensure its safety.

Link believes rogue nations that balk at having to submit to inspections would have no reason to refuse such a small, unobtrusive device. The cube is an early prototype — roughly a two-foot cube, with an active volume weighing 175 pounds — but Link and his team say with enough data collected during several months of testing at North Anna, it could soon justify to larger detectors operated by the International Atomic Energy Agency at facilities around the world.

Dubbed CHANDLER, this project is part of Virginia Tech’s Center for Neutrino Physics, of which Link is director. Together with fellow physics faculty and center members Patrick Huber and Camillo Mariani, he predicts the current detector, a prototype known as MiniCHANDLER, will demonstrate the potential for a future larger detector weighing in at a few tons.

The cube now sits just at the base of the concrete containment building of North Anna’s reactor 2, inside a small trailer dubbed the Mobile Neutrino Lab that contains a rack full of processors, all cooled by two air-conditioning units. The trailer will stay at North Anna for several months. On a recent trip, Link set the trailer up, starting data collection, with the ability to beam data wirelessly to Virginia Tech's Blacksburg campus.

There is a challenge in separating neutrinos created by the reactor from everyday radioactive “noise” from the ground or raining down from energetic cosmic particles slamming into the Earth's atmosphere, but Link and his team are confident they can extract a signal solely from the reactor neutrino output.

Up until now, neutrinos produced during nuclear fission could not be detected except with a massive machine the size of a house or built very close to the reactor, near impossible to deploy in a rogue nation.

How does the box work? If your career is nuclear physics, it’s easy. If not, well, it’s complicated. Roughly: The light-tight, high-tech box is packed with hundreds of small wavelength-shifting plastic scintillator cubes — they appear green in natural light — that carry the chore of detecting neutrinos emitting from a nearby reactor. When a neutrino interacts in the cube, it creates a small flash of light that can be recorded and tracked.

The detection of light can then be sent remotely to researchers either nearby or hundreds of miles away, according to initial research plans by Link and his team. “The whole problem with nuclear inspections is you have to know what is happening at all times to make this calculation,” Huber said.

“You need continuity of knowledge to make conclusions. But the stream of data from a reactor can be interrupted because of technical malfunction or diplomatic reasons. With antineutrino detection, you don’t have to know all that. It’s based simply on the detection of neutrinos.”