Language in game of thrones 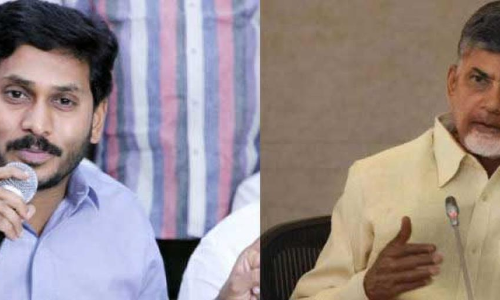 The Nandyal bypoll saw a verbal warfare with both sides indulging in unsparing attack on each other. Such a belligerent polemics are not uncommon, especially when the contest is nail-biting. But, what is disturbing is the language used in this game of thrones. Why should language in politics be so ridiculous? One plausible explanation is that the Nandyal outcome seems to be heading for a photo f

The Nandyal bypoll saw a verbal warfare with both sides indulging in unsparing attack on each other. Such a belligerent polemics are not uncommon, especially when the contest is nail-biting. But, what is disturbing is the language used in this game of thrones. Why should language in politics be so ridiculous? One plausible explanation is that the Nandyal outcome seems to be heading for a photo finish. When the stakes are so strong, the politics certainly turn ravenous.

The context is seen by the political circles as a precursor to the showdown in 2019. The politics of Andhra Pradesh is totally polarised between the TDP and the YSR Congress. The ruling Telugu Desam is still not ready to recognise the presence of the opposition, while the verdict of 2014 is still unpalatable for YSR Congress. The villain of peace is the slender margin that demarcated between the winner and the loser in 2014.

Besides, the politics of the state have been reduced to a fight between the two political personalities rather than candidates or the parties they represent. The candidates and the camps were interchanged with only the personalities at the helm remaining the true opponents in the battlefield turning the politics cold blooded. The ruthless political culture further vitiates the climate with the loyalists of both the leaders who leave no stone unturned to impress their indomitable supremos.

The electoral arena is personality-driven with the political parties especially in the regional sphere being essentially the fiefdoms of their leaders. As the parties transform into proprietorial concerns, the leaders down the line are more loyal than their masters. The leaders alone are not the culprits here. The political parties are woven around the charisma of their leaders. The democratic discourse, therefore, turns into an anthology of leadership.

The callous political culture blurs the boundaries of decency. The semantics of politics are no longer concerned with ideological predilections.

In this rat race, a leader or a party may be way ahead at a given point in time and in a given context. But, none disown such a grammar of politics. This is evident from the fact that political parties keep their gates open for leaders from their rival parties whom they earlier repudiated. The players may change. But, the rules of the game remain unaltered.

The mainstream media loves the toxicity of the language rather than the essence of political discourse as negativism is the news value. With the sound bite journalism and a mad rush to catch eye balls to capture the television rating points dictate the market place, the language turns much more bitter and the discourse gets more acrimonious. The headline chasing politicians have mastered the media management so well. The partisan media degenerates into the vitriolic pamphleteering. The ubiquitous social media has further vulgarised and vandalised the public debate.

This is the age of post-factual politics. In such post-truth political culture, debates are framed largely by appeals to emotion disconnected from the details of policy, and by the repeated assertion of talking points to which factual rebuttals are ignored. In such a political culture, campaigners continue to repeat their talking points, however untrue and unabashed they may be. The Nandyal poll scene is a witness to the onslaught of post-Truth politics in Andhra Pradesh as it turns into a line of actual control (LoC) between the ruling and the opposition parties.

The homogenisation of political content makes polity devoid of policy demarcation. In the absence of differences in policies and programmes, personal mudslinging takes an edge.

Quite unfortunately, in democracies, recrimination and abuse seem to be fetching at the hustings too as has been illustrated by the Trump phenomenon. In the market place, what sells is sale worthy. What interests public is in public interest. This applies to market place of politics too.

Parties and politicians consider their cause righteous, and their rivals’ an existential threat. Politics is perceived as the survival of the fittest. The ugly political machinations are unsurprising as everyone takes pleasure in such an ignoble political calculus. The electorate has Hobson’s choice as the radically different politics remain an Oasis.

Objections to such language are merely squeamish as the institutional regulations and the social control over such mercenary political behaviour are either feeble or dysfunctional. The gift of gab is characterised by the levels to which one can stoop down. The poverty of political philosophy rebukes democracy. Politics resemble theatre of the absurd.

The implications of this political metamorphosis are certainly grave. Research by Nathan Kalmoe, an assistant professor at Louisiana State University, has troubling implications for how an individual’s worldview might also be shaped by the rhetoric he hears. In 2010, Kalmoe presented groups of subjects with two different political ads, one relying on violent metaphors, another replacing those terms with less loaded synonyms.

In the groups that heard the first version of the ad, those with an already aggressive disposition became significantly more likely to support acts of political violence, reports The Guardian. This behavioral dynamic creates a spiral of such deviant political culture. Yet, all this is legitimised in the name of ends determining the means. This trend can prove to be perilous to society as the incendiary language permeates into social discourse too. The civilisation will suffer as politics lead the societies in the contemporary epoch.

Democracies are defined by the levels and depths of people’s participation. But, such inexorably acrimonious language in politics dissuades away right-thinking people from politics. Such a political trend is antithesis of democracy. No politics can never be a substitute to bad politics. There is an urgent imperative for grassroots social activism to shun such language. Such a civil society activism often referred to as fifth estate can act as a deterrent to the malaises of our political landscape.

People’s movements can set the right agenda for the public debate. Question or not to question such political culture can never be a question. Public intellectuals cannot be allowed to become an endangered species in the unholy political discourse. Democracy cannot be brutalised at the altar of power-hungry political species. This is the time for new renaissance in our politics and society. Emotional rhetoric should give way to reasoned debate.