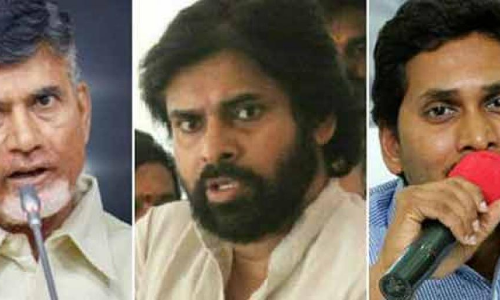 As the beleaguered state of Andhra Pradesh soaks in disgruntlement and disenchantment over the manner in which the Government of India has let it down, the political players are displaying their habitual political orchestra.

As the beleaguered state of Andhra Pradesh soaks in disgruntlement and disenchantment over the manner in which the Government of India has let it down, the political players are displaying their habitual political orchestra.

During the Telangana movement, political parties and their Members of Parliament from the state joined hands to compel the then UPA government to deliver the long-standing demand for separate state. The joint political initiative led by K Chandrashekar Rao could galvanise the national political support for the cause.

But, such an initiative is completely missing in Andhra Pradesh even as the Modi-led central government shows total apathy towards the genuine demands of the state. The government seems to be in no hurry even to implement the mandatory State Re-organisation Act. The lack of political stakes for the saffron party in Andhra Pradesh is, perhaps, the reason for inflicting such unacceptable neglect on the people of Andhra Pradesh who have been subjected to bifurcation completely against their wish.

The BJP was not only a party to the bifurcation but also the author of so-called justice package for the residuary state of Andhra Pradesh.

Against this backdrop, the state is to witness a bandh on February 8 to protest against the discrimination meted out to it. The obnoxious part of the whole episode is the manner in which the political spectrum of the state is divided and pitted against each other instead of fighting with the Centre jointly.

There is no dearth of display of political hypocrisy even as the people of state are simmering with discontent. The social media gives us an inkling of such growing discontent.

The Left parties which have nothing to do with the BJP have given a call for bandh. The Congress which has everything to gain from the discontent over the injustice in Union Budget has obviously extended its support to the bandh call. Surprisingly, the major opposition, YSR Congress, instead of leading this battle against the Centre, has also become the follower of the smaller parties' call.

There is a pattern in Jaganmohan Ready's lukewarm response. Jagan said that his MPs would resign if special status is not accorded, but, there are no signs of any such move. Instead of fighting with Modi government for denying Special Status, the opposition leader is primarily targeting Chandrababu Naidu for his alleged failure to get such a status.

The YSR Congress has unconditionally supported BJP nominees in both Presidential and Vice-Presidential polls. Thus, the party is in no mood to take on Modi regime as it is waiting in wings to join the NDA bandwagon at least as post poll ally.

Chief Minister N Chandrababu Naidu has openly displayed his anger and frustration over the raw deal meted out to the residuary state of Andhra Pradesh despite NDA ruling both in the State and at the Centre. But this does not suffice, given the gravity of injustice and reaction it evokes.

Prime Minister Narendra Modi was also party to the promises made by Naidu to the people of the truncated state in the run-up to the elections in 2014. In fact, the present Finance Minister, who was then the Opposition leader in Rajya Sabha, had vociferously defended the interests of the state along with the present Vice-President, M Venkaiah Naidu, when the state bifurcation act came up for debate in the House.

Naidu personally submitted the state's wish list to the Finance Minister during his pre-budget discussions with him. But, the budget speech has not even mentioned the state. The TDP leadership strongly feels that this is nothing but undermining the political stature of their leader who was the cynosure of national politics much before Modi was elevated to the national political stage.

The key demands of the state include funds for the Polavaram Project, filling the revenue deficit as prescribed by the bifurcation act, railway zone for Visakhapatnam, steel plant for Kadapa district, special assistance measures in lieu of promised special category status that shall allow for greater central share in the development schemes, fiscal support for the construction of capital Amaravati, etc.

Surprisingly, none of them figured in the budget speech, creating a massive hostile perception among the electorate that the state is getting step-motherly treatment under the NDA dispensation. Naidu is seriously wary of the possible political fallout of such a perceived discrimination in the Union Budget 2018.

Sources close to Naidu feel that Modi is personally suspicious of the Chief Minister's national political credentials. The electoral trends reveal that Modi's popularity is waning while Rahul Gandhi is yet to fully capitalise on this. This throws up the possibility for a non-BJP and non-Congress leader to compete for the top political post in the country.

With the re-entry of Nitish Kumar into the NDA fold, the demise of J Jayalalithaa and the decline of Mayawati, Naidu and Mamata Banerjee remain the contenders from the so-called federal front, if it evolves. It is not that such a possibility is around the corner.

But, a leader like Modi cannot even accept remote chances of any competition for him within the party, alliance or outside. The TDP sources also state that Naidu too has prime ministerial ambitions. He is more acceptable and has better national stature than any other regional satraps.

He had not accepted the offer during the United Front regime. But now, with his son and the heir apparent ready to take over, Naidu has no inhibition to move to Delhi politics. The TDP circles believe such a political possibility is behind the lack of proper chemistry between Modi and Naidu.

The BJP is in a love-hate relationship with the TDP, though the two parties share power in the state and at the Centre. Even as the party shares ministerial berths in Naidu's Cabinet, a section of state BJP leaders never misses an opportunity to criticise the TDP regime.

Jaganmohan Reddy is certainly an option for BJP if it is to estrange Naidu. The acquittal of DMK leader in 2G spectrum case, the lack of any progress on the cases in regard to Reddy and the conviction of BJP adversary Lalu Prasad Yadav and BJP stalwart Subramanian Swamy calling Rajini, whom the party is wooing, as corrupt reveal the big picture in Indian politics, though, it is technically wrong to make a political reading of the judicial process.

The fact that the Andhra Pradesh BJP leaders never criticise Reddy even while some of them attack their ally Naidu is a clear indication of BJP's policy of dual alignment with regional parties to derive maximum political mileage. The BJP, in fact, hoped to embrace the matinee idol Pawan Kalyan, who campaigned for the TDP-BJP combine in 2014. Pawan himself revealed recently that BJP president Amit Shah had requested him to merge his Jana Sena Party into BJP. No BJP leader so far denied these claims of the Jana Sena chief. As the BJP is shrewdly doing its political maths, Naidu cannot remain silent.

Alliance with Modi was the critical factor in reaping the mandate in 2014 as the margin between TDP and YSR Congress was a mere two per cent. Naidu is unable to come to a firm conclusion on the cost of severing ties with the BJP, especially when the Assembly elections are coterminous with Lok Sabha elections and the possible impact of the national political mood cannot be completely denied. That too with the opposition YSR Congress ready to have a tacit understanding with the BJP, Naidu is doubly cautious. Naidu 's failure to fire a final salvo on the issue of injustice in Union budget is the result of such political maths.

Quite surprisingly, even Pawan Kalyan is yet to voice his concern on the issue indicating his politics of prevarication. His inexplicable silence strengthens many theories around Jana Sena and the prominent among them is that he is, perhaps the Trump Card of Chandrababu Naidu. Thus, the interests of Andhra Pradesh are held ransom to the politics of expediency. We cannot allow these political troglodytes to relentlessly display pusillanimity.