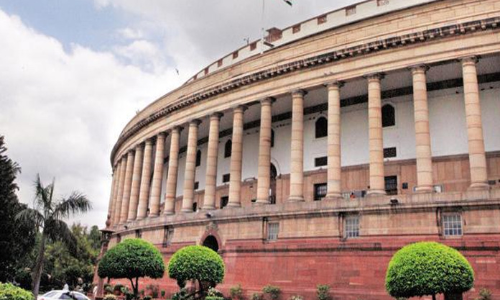 As the last Parliament session for the BJPruled Treasury Benches concluded on Wednesday, a part of the country erupted in joy This rarely happens But North East richly deserved to celebrate the lapsing of the Citizenship Bill with the Centre failing to push it through Rajya Sabha despite a last ditch effort Of course, along with it the Triple Talaq Bill also lapsed

As the last Parliament session (for the BJP-ruled Treasury Benches) concluded on Wednesday, a part of the country erupted in joy. This rarely happens. But North East richly deserved to celebrate the lapsing of the Citizenship Bill with the Centre failing to push it through Rajya Sabha despite a last ditch effort. Of course, along with it the Triple Talaq Bill also lapsed.

This gives the BJP a fresh lease of life in the North East as it can always claim that it allowed the Bill to be lapsed respecting people's sentiments against the same. Whatever the BJP leadership might claim over it, it is not so innocuous as it seems to be. The BJP deliberately brought the Bill as it wanted the demography of not only the North East but also that of West Bengal to change.

The minority domination in several constituencies - mostly comprising Bangladesh Muslims - was not to its liking. The North Eastern region was a victim of such sinister and deliberate moves in the past. Only, it was the minority population that was sought to be increased to the detriment of the locals by the Congress. Since colonial times, Assam has seen migration from the adjoining areas. The British brought farmers and plantation workers from Bengal and Bihar to augment their revenues.

The problem worsened after separation of East Pakistan and with the persecution of East Pakistanis who never ever wanted to be with Pakistan (it was the UP, Bihar and Tamil Nadu Muslims who voted overwhelmingly for Pakistan's creation while they themselves remained safe in their regions leaving Punjab and East Bengal populations to take the brunt).

The large-scale immigration from Bangladesh into Assam during 60's and 70's led to mass protests which culminated in the Assam Accord between the government headed by late Rajiv Gandhi and All Assam Students Union (AASU) in 1985.

It was to deal with the problem of Bangladesh immigrants. A National Register of Citizens was prepared after the conduct of Census of 1951 which showed the houses in serial order in each village, the number and names of persons staying therein.

To implement the Assam Accord and to detect illegal immigrants and their descendants, the NRC had to be upgraded. But it did not start for variety of reasons until SC gave a deadline of December 31, 2017 to publish the first draft of NRC for Assam. The Congress governments never updated the same for the sake of Muslim vote banks. The party decried the Centre's NRC too.

It was in this context that the Citizenship Bill which sought to grant citizenship to six religious minorities - Hindus, Jains, Sikhs, Parsis, Christians and Buddhists - from Pakistan, Afghanistan and Bangladesh who came to India before December 31, 2014 became a bone of contention as it would lead to altering the political fortunes of parties again. It is like saying that one wrong will set another one right. That two wrongs make a right is alright in rhetoric and ethics, but it is a fallacy of relevance. It is antithesis. People's celebration in the region is a pointer to this.