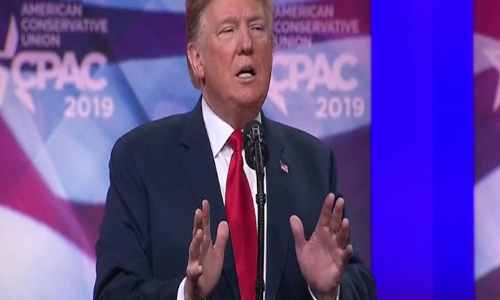 Donald Trump is at his best once again disrupting India alliance The Trump administration has notified that it wants to scrap trade concessions for India, the largest beneficiary of the generalised system of preferences GSP that impacts 57 billion dollars worth of goods This is, by any yardstick, not a move that will have a major impact on India

Donald Trump is at his best once again - disrupting India alliance. The Trump administration has notified that it wants to scrap trade concessions for India, the largest beneficiary of the generalised system of preferences (GSP) that impacts 5.7 billion dollars’ worth of goods. This is, by any yardstick, not a move that will have a major impact on India.

However, this will certainly raise trade tensions between the two countries. But India will also be forced to impose retaliatory tariffs on US imports worth 10.6 billion dollars which may come into effect from April 1. Withdrawing benefits will have a symbolic consequence not a tangible one anyway. This back and forth has been on well over a year.

The move marks the first time the Trump administration has targeted what it considers unfair practices by India, a country it has sought to cultivate as a strategic partner. Trump did the same with China only to eat his words and is now trying to deescalate the tensions by striking a deal. When Trump had abruptly announced a hike in customs duties on some steel and aluminium products, India went ahead with a levy of tariffs on products like almonds and apples, but its implementation was deferred more than five times as India hoped to secure a good trade deal from the US.

Trump had even called India tariff king accusing India of imposing tremendously high tariffs on American products. Though India was ready to make some concessions in the past, some of the demands of the US were not acceptable to it. The US insisted on unconditional export of dairy products to India, ignoring India's religious concerns.

Dairy products must be derived from animals that have never consumed any feed containing organs, blood or tissues of ruminant origin. India was willing to cut tariffs on ICT products, where there was a direct US interest. Any other reduction could help a third party, especially China. The decision to review and ultimately eject India from the GSP programme, however, was sparked by representations made by two American lobbies - the medical devices industry and the two dairy products associations.

The US under Trump has had a troubled relationship with all its partners and even quasi-allies like India. The partners, having bought into the US security umbrella and left with no option, have been forced to swallow Trump's vagaries. But India has not succumbed to the pressure and has not played into the hands of the US.

All these months, India has hoped that Trump would go easy and a deal could be reached through a dialogue at the Commerce Minister level despite US's repeated attacks on its policies as well as its disputes at WTO. Lack of a clear strategy to tackle trade issues and a muted response from political leadership complicated the issue further.

The business itself may be low between the two, but any action against India is seen to be providing political muscle to Trump. The current Indian government does not have a plan to counter the US offensive, with its proposals for truce rebuffed by the Americans.