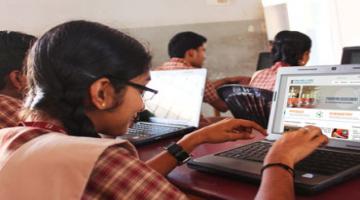 Hyderabad: Ravi Shankar Prasad, Minister of Communications and Information Technology, launched a unique eLearning programme called OLabs recently which enables high-school students to perform virtual science-lab experiments online. Under this nationwide initiative, 30,000 teachers across all states in India will be provided free training to teach students how to use OLabs. The eLearning programme will be hosted on the National Knowledge Network (NKN) to support its scaling to millions of students across the country.

Olabs– short for “Online Labs” – has been developed by Amrita CREATE (http://www.amrita.edu/create), an educational technology research initiative of Amrita University under the guidance of the university’s chancellor, Mata Amritanandamayi, in association with CDAC, Mumbai, under a research grant from the Department of Electronics and Information Technology. “Olabs will help students better understand complex science concepts and build a scientific temper,” said Vice Chancellor of Amrita University, Dr Venkat Rangan.

OLabs is officially endorsed by the Central Board of Secondary Education (CBSE) as a teaching aid for all its schools. It will also be available in Hindi, Malayalam and Marathi and offered in both urban and rural schools. Online Labs is based on the idea that lab experiments can be taught using the Internet more efficiently and less expensively.

The labs can also be made available to students with no access to physical labs or where equipment is not available owing to it being scare or costly. Online Labs' technology has an offline tablet-based component, which ultimately will allow teachers being trained to take the Labs into remote villages where Internet connectivity may not be available.

OLabs has been widely praised by educators around the country. “Online Labs by Amrita CREATE is a very useful application for students of science of classes IX to XII. It will not only give them first-hand experience of performing experiments, which will build up their scientific temper, but also clarify the scientific concepts to a great extent,” said Dr Sasi Banerji, Principal, Bhavan Vidyalaya, Panchkula, Haryana.

“OLabs is a great educational initiative from Amrita University. Compared to other educational software such as SmartClasses and websites developed by the Governmtent as well as private companies, Online Labs stands out for its creativity and originality,” said Gnana Gowri, Chief Education Officer, Govt. of Tamil Nadu, while inaugurating a workshop for school teachers in Tamil Nadu.

“It’s a nice initiative by Amrita University. We need to involve Odisha Government Schools too in this,” said MS Padhi, IAS, Commissioner-cum-Secretary, Government of Odisha, during a workshop in Bhubaneswar, Odisha.