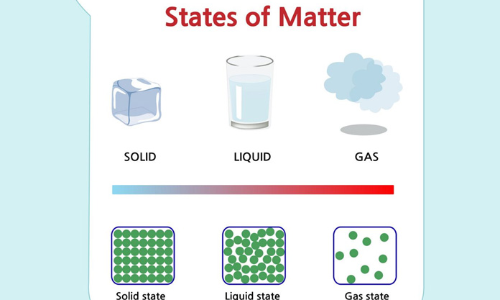 All things are made up of matter (matter is any physical thing that has mass and takes up space). Matter can exist in three different forms: solid, liquid, and gas. When an object is a solid, its molecules are arranged in a pattern and can’t move around much. In a liquid, molecules are farther apart, can move around, and are not arranged in a pattern.

The movement is what makes a liquid fluid (or pourable) and take the shape of a container it is in. The molecules in a gas are even farther apart than in a liquid and move freely with no pattern at all. Go here to see what the molecules of substances look like as a solid, liquid, and gas.

Matter can change from one state to another when physical conditions change; when energy, such as heat, is added or removed, a substance can change from a solid to a liquid, or from a liquid to a gas.

For example, peanut butter does not flow like a liquid. It acts more like a solid even though it is very soft. However, if you use heat (i.e., add energy) to melt peanut butter, its state will change and it will flow like a liquid! Note that not all substances can change states just by adding or removing heat—sometimes other physical changes, such as increased pressure, are needed to change the state of a substance.

Water is unique because it is the only natural substance that can exist in all three states of matter at the temperatures normally found on Earth! Water is usually a liquid, but when it reaches to 32° Fahrenheit (F), it freezes into ice. (Ice is the solid state of water.) When water reaches 212° F, it boils. When it begins to boil, some of the water turns into steam. (Steam is the gas state of water, and is also called water vapor.) When steam comes into contact with cool air (which reduces energy), it can condense back into water droplets (liquid again).

Those water droplets could then freeze into (solid) ice. Even with all of these state changes, it is important to remember that the substance stays the same—it is still water, which consists of two hydrogen atoms and one oxygen atom. Changing states of matter are only physical changes; the chemical properties of the matter stays the same regardless of its physical state!

Normally, when water reaches 32° F it begins to freeze. As you learned in the super-cooled water experiment, water needs a nucleation site, or a spot for the first ice crystals to form. When there isn’t one, water can reach a temperature below the freezing point without turning into ice. When that happens, the water is said to be super-cooled. Can you think of any other ways to keep water from freezing when temperatures are below freezing? Salt lowers the freezing point of water and is often used to melt dangerous ice off of roads and sidewalks in the winter.