What is genetic modification? 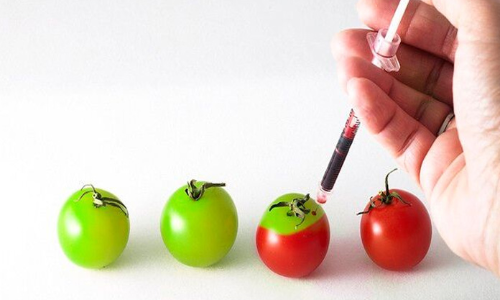 Genetic modification is the process of altering the genetic makeup of an organism This has been done indirectly for thousands of years by controlled, or selective, breeding of plants and animals

Genetic modification is the process of altering the genetic makeup of an organism. This has been done indirectly for thousands of years by controlled, or selective, breeding of plants and animals.

Modern biotechnology has made it easier and faster to target a specific gene for more-precise alteration of the organism through genetic engineering. The terms "modified" and "engineered" are often used interchangeably in the context of labeling genetically modified, or "GMO," foods.

In the field of biotechnology, GMO stands for genetically modified organism, while in the food industry, the term refers exclusively to food that has been purposefully engineered and not selectively bred organisms. This discrepancy leads to confusion among consumers, and so the U.S. Food and Drug Administration (FDA) prefers the term genetically engineered (GE) for food.

Genetic modification dates back to ancient times, when humans influenced genetics by selectively breeding organisms, according to an article by Gabriel Rangel, a public health scientist at Harvard University. When repeated over several generations, this process leads to dramatic changes in the species.

Dogs were likely the first animals to be purposefully genetically modified, with the beginnings of that effort dating back about 32,000 years, according to Rangel. Wild wolves joined our hunter-gatherer ancestors in East Asia, where the canines were domesticated and bred to have increased docility. Over thousands of years, people bred dogs with different desired personality and physical traits, eventually leading to the wide variety of dogs we see today.

The earliest known genetically modified plant is wheat. This valuable crop is thought to have originated in the Middle East and northern Africa in the area known as the Fertile Crescent, according to a 2015 article published in the Journal of Traditional and Complementary Medicine.

Ancient farmers selectively bred wheat grasses beginning around 9000 B.C. to create domesticated varieties with larger grains and hardier seeds. By 8000 B.C., the cultivation of domesticated wheat had spread across Europe and Asia. The continued selective breeding of wheat resulted in the thousands of varieties that are grown today.

Corn has also experienced some of the most dramatic genetic changes over the past few thousand years. The staple crop was derived from a plant known as teosinte, a wild grass with tiny ears that bore only a few kernels. Over time, farmers selectively bred the teosinte grasses to create corn with large ears bursting with kernels.

Beyond those crops, much of the produce we eat today — including bananas, apples and tomatoes — has undergone several generations of selective breeding, according to Rangel.

The technology that specifically cuts and transfers a piece of recombinant DNA (rDNA) from one organism to another was developed in 1973 by Herbert Boyer and Stanley Cohen, researchers at the University of California, San Francisco, and Stanford University, respectively.