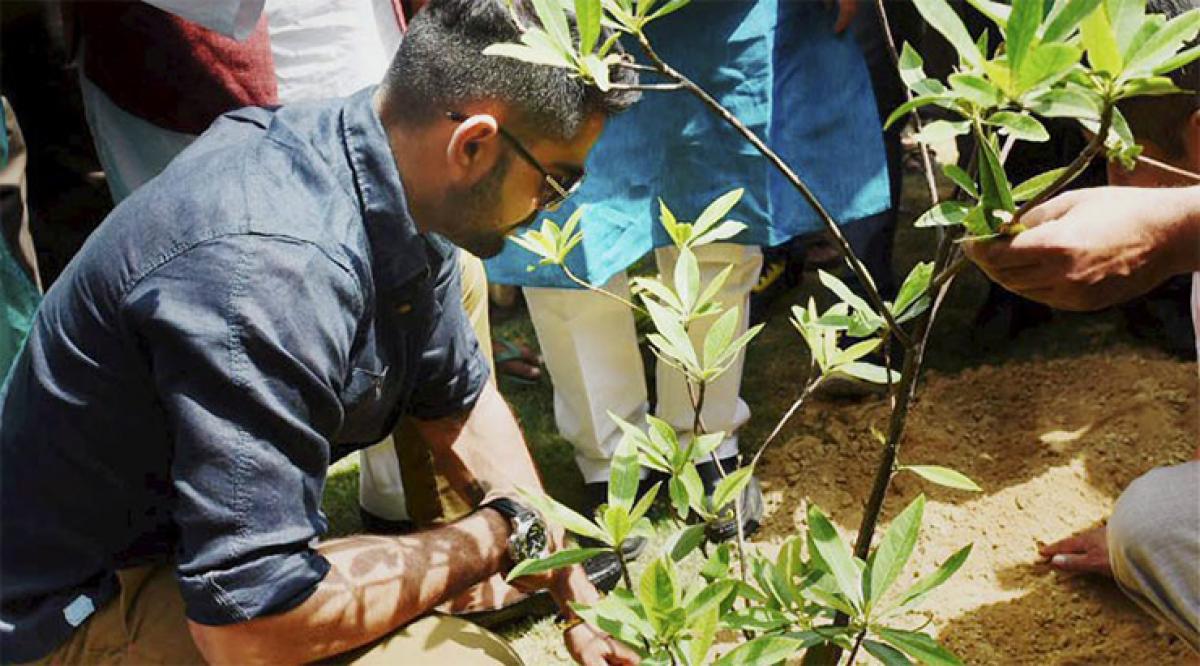 Speaking on the occasion, the Prime Minister exhorted each family to plant trees in the coming monsoon season and to take pride in the number of trees planted by the family, just the same way as they take pride in worldly possessions. The Prime Minister said that living in harmony with nature is the only way to avoid a catastrophic situation on Mother Earth.

The Prime Minister also placed a traditional earthen-pot (matka) along with the sapling, which is a traditional way of conserving water and ensuring that the sapling has regular water supply.

At a separate function at the office premises of the Ministry of Environment, Forest and Climate Change here today, Minister of State (Independent Charge), Shri Prakash Javadekar planted a ‘Rudraksh’ sapling (Elaecarpus), while Captain of the Indian Test Cricket team, Virat Kohli planted a ‘Kachnar’ sapling (Bauhinia Variegata) at the lawns of Paryavaran Bhawan.

A Memorandum of Understanding (MoU) was signed between the Ministry of Environment, Forest and Climate Change and NOIDA for the development of Botanic Garden of Indian Republic (BGIR) in NOIDA.

Speaking on the occasion, Minister of State (Independent Charge) of Environment, Forest and Climate Change, Shri Prakash Javadekar reiterated that the mandate of the Ministry of Environment, Forest and Climate Change is to strike a balance between the five elements of nature. He also said that the Ministry’s mission is directed towards Clean Water, Clear Air, Clean Energy, Clean Environment and More Green. The Minister emphasized that to achieve this, a people’s movement and the participation of people is needed.

Minister of State, Zoological Gardens in Uttar Pradesh, Dr. Shiv Pratap Yadav said that the laying the foundation of Botanical Garden in NOIDA on the occasion of World Environment Day will send out a message throughout the nation. He said that the Botanical Garden would also act as a centre for botanical research scholars to carry out studies on rare species of plants. The Uttar Pradesh Minister also said that Jai Udyan be added to the slogan of Jai Jawan, Jai Kisan, Jai Vigyan.

Secretary, Ministry of Environment, Forest and Climate Change, Shri Ashok Lavasa expressed the hope that just like the large gathering that has assembled on the occasion of World Environment Day, a large number of trees would be planted throughout the country.

Earlier, artists from All India Radio presented a “Prakriti Vandana’ as a tribute to the nature, penned by Smt. Madhu Pant, former director of Bal Bhawan.