Kuchaman Travelling back in time 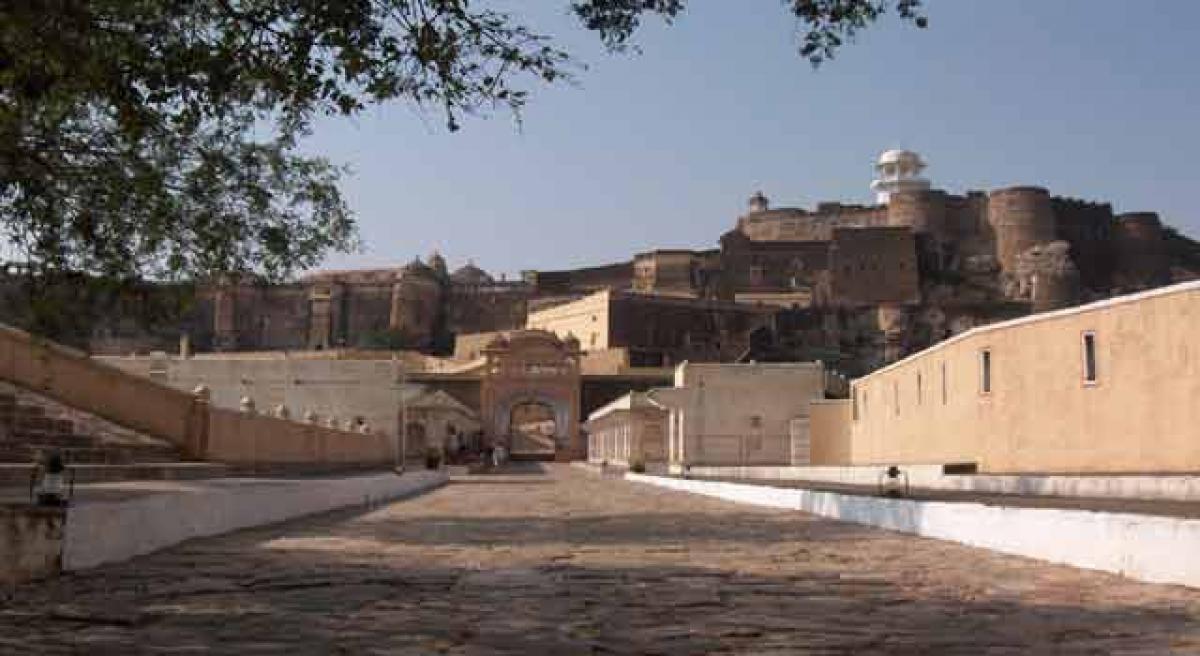 After tasting the tried and tested must-see popular tourist places of Rajasthan, we were seized by a desire to experience the real Rajasthan and that is how we landed up in this very small city called Kuchaman.

After tasting the tried and tested must-see popular tourist places of Rajasthan, we were seized by a desire to experience the real Rajasthan and that is how we landed up in this very small city called Kuchaman.

Thankfully not many people have heard about this town because of which the charm of the place is still very much intact. We arrived in Kuchaman one afternoon after a brief train journey from Jaipur and realised that it was really in the middle of nowhere.

Kuchaman’s old havelis with fresco paintings on walls are like open air art galleries with a unique style and architecture. The city is a rare jewel set in the glittering sea of the golden sands of Rajasthan

We had booked our stay at the famous Kuchaman Fort, which has now been converted into a heritage hotel. After alighting from the train, we negotiated a local cab that dropped us at the gate of the Fort and then we were treated to a hotel-jeep trip up the mountain, reversing around hairpin bends at an angle of 45 degrees! It was really a hair-rising ride!

After arriving at the hotel, we learnt that most visitors to this unusual and beautiful hotel come by private car or in a tour party bus! The hotel staff was most surprised to learn that we had come by train.

Perched atop a 1000 ft steep hill along what was once an integral Central Asian trade route, the Kuchaman Fort is the most distinguished attraction of the town. The scenic beauty and the exquisitely built “havelis” within the fort make you travel back in time.

This 1100 year old fort, built in 9th century AD by the Rathore kings, attracts Indian as well as foreign tourists throughout the year. We were also enlightened by our over enthusiastic hotel manager that some Bollywood films like “Drona” were shot in this fort.

Once the seat of great battles, the Kuchaman Fort, with its high and massive ramparts, 32 bastions, 10 gates and various defenses was well known for being an impregnable fort.

The fortress, built by the Gujjar Pratihara dynasty as far back as 760 AD is equally famous for its unique architecture, besides water management and storage schemes. The Fort had several underground and over ground tanks and few of them exist even today.

The fort displays a rich collection of original work in semi-precious stones, glass and gold paint. It also houses the famous Sheesh Mahal (Glass Palace), which is a sight to marvel at.

A chess board is carved in the courtyard of the Mahal on which the kings used to play chess. Jal Mahal (Water Palace) is another unique concept visualised and implemented with an aim to provide the queens and princesses with a swimming pool, which actually is an underground royal pool with its supercilious cloisters and arcades.

The fort is its present avatar as a Heritage hotel provides an opportunity to its residents to relax and rejuvenate in these pools and envisage the imperial beauties that have relished it.

The city of Kuchaman also has some beautiful temples. The Krishna Temple and the Lok Dev Temple are two of them. As the name suggests, Krishna temple is an old yet graceful structure that houses the idol of Lord Krishna. The idol is said to be 200 years old.

The courtyard, walls and the entrance have been beautifully carved out and depict the Hindu culture that existed almost 1000 years ago. Another sight of splendor is The Meera Mahal situated in the centre of the city, which houses beautiful paintings depicting the life of the passionate Lord Krishna devotee and the Rajput poet saint, Meera Bai.

Kuchman’s one more claim to fame is its proximity to the famous “Sambhar Lake”- India’s largest salt water lake (almost 35 kms long) considered to be a “wonder” as the big salt water lake springs out of nowhere.

The lake has history, mythology and archeological importance right from 1870 when the British took over the lake to export salt. One can still see the rail network that the British built to transport salt.

This lake has been providing means of livelihood for centuries to thousands of people residing in the vicinity, who make salt and sell it in the local market. The lake, a Ramasar site also plays host to a large variety of birds in the winters like flamingos and some of them even come from far off places like Siberia.

The best thing about Kuchaman fort is the fact that as it is still untouched by the commercialisation. The rural life around the fort is really at is at its charming and vibrant best.

We spent a great three days in this unique place, well off the beaten tourist track! Our room had a separate sitting area and authentic arches and niches with colorful decorations.

During the course of our stay we learnt that the restoration process required not only ample time and money, but also great precision and skill in planning, without disturbing the originality of this place.

The work involved using the same ingredients that were used by the masons centuries ago. The hotel manager told us that the descendants of the masons and artisans who had built the Kuchaman Fort still live in and around the city of Kuchaman and are known as "Kumawats".

The visit to Kuchaman’s beautiful palaces, the mahals and the havelis of the town, which are actually unique in their style and architecture, make you travel back in time.

Kuchaman city, a rare jewel set in the glittering sea of the golden sands of Rajasthan, has intrigued me so much that if provided an opportunity to visit this place once more, I would not even give it a second thought.

Location: Kuchman about 110 kms away from Jaipur is situated in the Nagaur district of Rajasthan.
Access: The small town that hosts a railway station is easily accessible from Jaipur, both by train and road. The road condition is good.
Accommodation: Though accommodation is available to fit all pockets, the fort turned hotel is undoubtedly the best place for the most memorable memories. For further details, visit http://www.hotelsrajasthan.net/kuchamanhotels/kuchamanfort.html