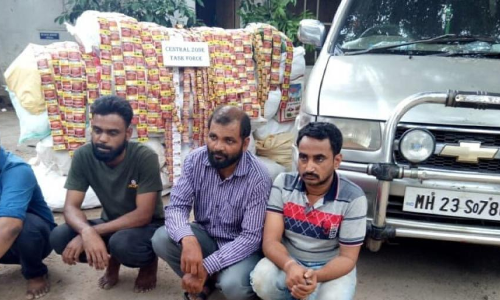 Eighteen bags full of tobacco, zarda and pan masala were reportedly found in a Tavera car. As the sale of tobacco products is prohibited in Hyderabad, to earn easy money Santosh with the help of Syed Rafeeq and Mohd Feroze hatched a plan to transport and supply tobacco products.

Accordingly, while they were delivering the tobacco products to Sabavath Suryam of Amberpet and Mohd Omer Majid of Shaheennagar, the police apprehended them and seized the banned products along with the Tavera used for transporting.

Rafeeq was working as a salesman at a shop at Gunj Market in Bidar in Karnataka. Surya, an auto driver from Hyderabad, used to purchase the gutkha from Rafeeq and keep stock at his house. Later, he used to sell the illegal items at huge profits to pan shops.

Majid, a resident of Shaheennagar Hyderabad used to supply the tobacco products to the pan shops. He used to purchase them from Santosh through Rafeeq and Mohd Feroze of Bidar.

The apprehended four accused persons along with seized properties were handed over to Amberpet Police Station for further action. The accused were apprehended by Inspector of Police Sayini Srinivasa Rao and Central Zone Task Force team.