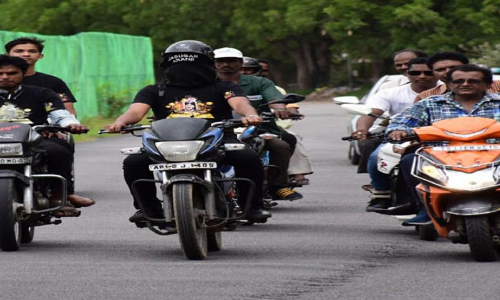 A disciple of noted magician Jadugar Anand demonstrated a blind-folded motorcycle driving feat on Sanjeevaiah park-NTR Marg-Sanjeevaiah Park in the city on Sunday to sensitise people against negligent driving.

Secunderabad: A disciple of noted magician Jadugar Anand demonstrated a blind-folded motorcycle driving feat on Sanjeevaiah park-NTR Marg-Sanjeevaiah Park in the city on Sunday to sensitise people against negligent driving.

The disciple was blind-folded with a cloth after covering his eyes with cardboard pieces and cotton. Volunteers to the programme led the driver to his vehicle. Later, Jadugar Anand flagged off the rally. The driver is able to reach the destination safely riding the vehicle with normal speed sensing the traffic. Several people were awe-struck with his ability to maneuver the two-wheeler meandering through the Sunday traffic.

Some riders slowed down their vehicles and observed the blind-folded driver and praised his skills. People all along the route encouraged him. At the end of the demonstration, Jadugar Anand exhorted the people to observe traffic rules and ensure that the roads were safe for one and all. The objective of the demonstration was to discourage driver from driving the vehicles with negligence.

When a blind-folded person can drive the two-wheeler safely, people with vision are indulging in road accidents only because of the negligent driving, he opined. He appealed to vehicle riders in the city to observe the traffic rules driving the vehicles with concentration to ensure that the city roads are safe for everyone.