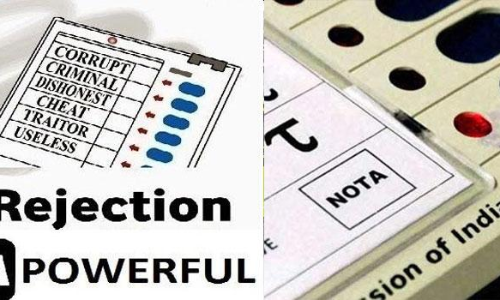 In several assembly constituencies, None of The Above NOTA votes polled more than several contesting candidates NOTA gives a choice to people to reject all candidates

Hyderabad: In several assembly constituencies, None of The Above (NOTA) votes polled more than several contesting candidates. NOTA gives a choice to people to reject all candidates. While the debate rages on whether people should go for NOTA or vote for the best candidate among the lot, in the recently concluded elections, a huge number of voters chose NOTA instead of the candidates.

Reshma Begum, a teacher at Sai Krupa school, said, "I have given my vote to NOTA for two reasons; the first one is it is my right, and the second is I want the youth to know that there is a need for better politicians and parties in India."

Krishna, a sweeper, said, "I didn’t know whom to give as all of them are sailing in the same boat. So I asked the boys outside my booth they said give NOTA if you don't find anyone capable." Shaikh Salauddin, president of Telangana Vehicles Drivers Association, said, "None of the political parties cleared the bills and accepted the demands and this made me drive a campaign as 'My vote for NOTA'."

Ahsan Mohiuddin, a first-time voter, said," I was excited about my vote when I was thinking whom to cast my vote, but I could not decide. NOTA came handy."Juhi Kumari, a student at University College of Women, said," I gave my vote to NOTA as none of the government forming parties has given me scholarship yet despite their promises." Raju Goud said, "I wanted a new political party who are more promising, and I didn’t want my precious vote to go behind such fake parties."

Hajera Sulatana, pursuing her diploma in hotel management, said, "I voted for NOTA and will keep doing until I find a political party worth my vote."