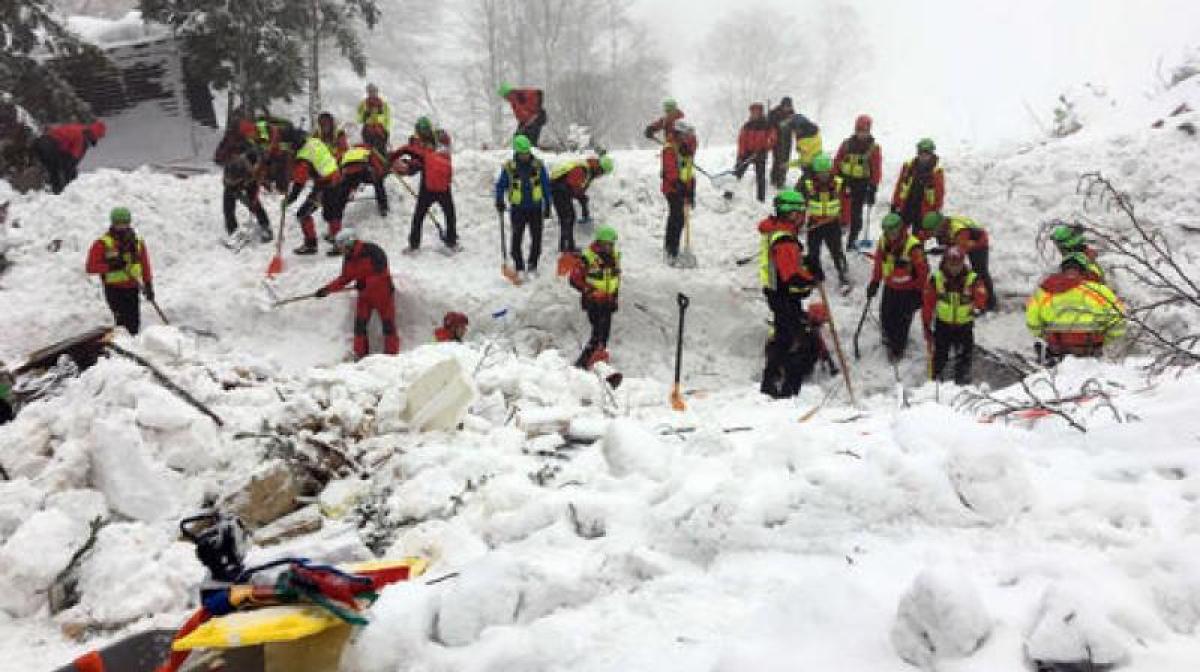 Italian rescuers pulled four survivors from an avalanche-hit hotel on Saturday and said they remained hopeful of finding alive at least some of the 23 people still trapped under the ruins. The latest rescues lifted the total number of survivors to 11.

Italian rescuers pulled four survivors from an avalanche-hit hotel on Saturday and said they remained hopeful of finding alive at least some of the 23 people still trapped under the ruins. The latest rescues lifted the total number of survivors to 11.

But there were 23 people still unaccounted for, according to a first official statement on the number of missing.

Morale among the teams of mountain police and firefighters remained high after Friday's dramatic rescue of all four children who were inside the Hotel Rigopiano, in central Italy, along with the mother of two of them.

But the rescue operation, now in its third day, was increasingly resembling a race against the clock amid fears that anyone still alive could succumb to the cold before being found.

Two men and two women were rescued alive in the early hours of Saturday.

There were no reports of any other signs of life but officials emphasised that was no reason to give up hope.

Enrica Centi, a spokeswoman for the mountain rescuers involved in the operation, said: "There is still hope because although no more voices have been heard, there may be people trapped behind or under a cement wall which would make it impossible to hear them."

Heavy snow and poor visibility that grounded helicopters in the area was hampering the rescue effort.

"The operation continues to be very complicated," said Fabrizio Curcio, head of the civil protection agency. "The rescuers are working in extreme conditions."

Teams of firefighters and police are combing a debris-strewn area bigger than several football pitches as a result of the devastating force of the avalanche, which pushed the three-storey hotel some 10 metres (30 feet) from its foundations.

And Friday's rescue showed that even once someone is located, it can take many more hours to complete their extraction amid an ever-present risk of further masonry collapses.

The latest operations bring to 11 the total number people who survived the disaster, including two hotel guests who were outside when the avalanche struck just before nightfall on Wednesday. Five bodies had been recovered by lunchtime on Saturday.

In a first official update on the numbers at the hotel when the avalanche struck, the prefecture in the nearest city, Pescara, said 23 people remained unaccounted for.

Earlier estimates had put the missing figure at between 11 and 20 with the uncertainty caused by doubts over the guest register and whether any casual visitors were in the bar or restaurant.

The first rescuers battled through a snowstorm to reach the hotel early on Thursday and since then, progress has been painfully slow because of the risk of masonry and snow slides.

The children likely survived because they were in or around a games room which was not crushed by the avalanche.

"There were three of us kids playing pool. One of the mums was there but all the other adults were in another room," nine-year-old Edoardo Di Carlo said after his rescue.

"It is a miracle that my nephew was found," his aunt, Simona Di Carlo, told reporters. "I was crying for two days but I never lost hope." His parents, however, remain missing.

Two of the children rescued were from the same family of four, all of whom emerged unscathed after an extraordinary sequence of events.

The father, Giampiero Parete, escaped because he had gone out to the car to get some pills for his wife just before the avalanche struck.

It was him who raised the alarm and he was inconsolable for some 36 hours before learning his wife Adriana and children, Gianfilippo and Ludovica, had been found.

Adriana and Gianfilippo were extracted unscathed at midday Friday but the family had to endure another agonising wait before Ludovica, 6, was brought to safety at dusk.

The avalanche followed four earthquakes of more than five magnitude in the space of four hours earlier on Wednesday.

The death toll from the quake, not including the victims at the hotel, rose to five on Saturday.

Some 33,000 homes were still powerless and 8,000 troops and emergency services were deployed to help the affected region.