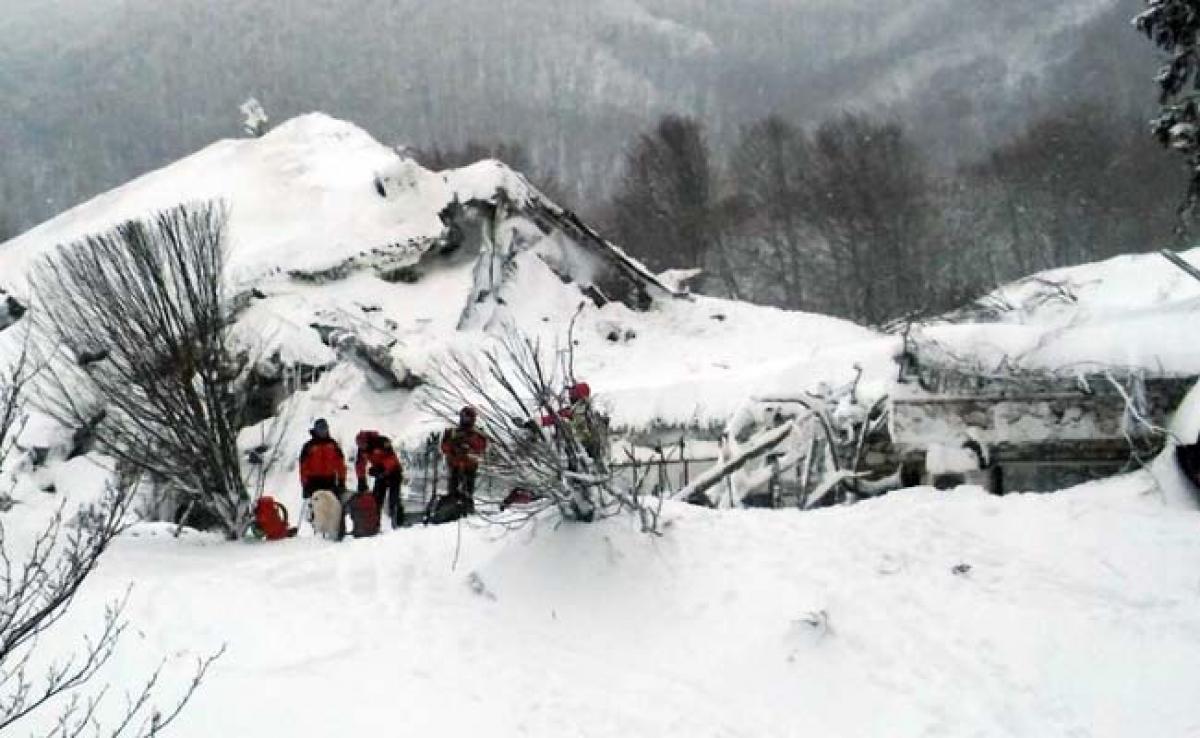 Survivors of Italy\'s avalanche disaster ate snow to stay hydrated and sang to keep their spirits up as as they huddled in pitch black, cramped cavities in the mangled wreckage of the Hotel Rigopiano.

Survivors of Italy's avalanche disaster ate snow to stay hydrated and sang to keep their spirits up as as they huddled in pitch black, cramped cavities in the mangled wreckage of the Hotel Rigopiano.

The traumatic nature of their life-or-death ordeal emerged Sunday as rescuers insisted they had not abandoned hope of finding some of the 23 other people buried under the icy ruins, despite 48 hours having elapsed since they last detected signs of life.

"We have hope. Even if there are no signs of life, you could drill through a wall and suddenly there'd be contact. That's what happened with the other survivors," said Luca Cari, a spokesman for the rescue operation.

Rescue teams were working round the clock with only two-hour rest breaks to ensure the first responders most familiar with the layout maximise their time on site.

The risk of another avalanche remained high and snow and fog continued to hamper the rescue effort in the mountains of central Italy.

Work was focused on reaching a section of the back of the hotel that was protected by a rock buffer.

"We are fairly confident there are rooms intact there," Cari said.

"The problem is getting to them. We don't have much room to manoeuvre, the holes we are climbing down into are narrow, and then we have to break through very thick walls to get into rooms, hoping to find someone inside."

The survivors extracted so far, five adults and four children, were trapped under the snow-blanketed remains of the three-storey building for 40 hours before their first contact with rescue teams.

"I'm Georgia and I'm alive," 22-year-old student Georgia recalled telling the rescuers. "It was the most beautiful thing I've ever said," she said in a hospital bed interview with Corriere della Sera.

Galassi and her boyfriend Vincenzo Forti, 25, had to wait another 18 hours before they were finally extracted in the early hours of Saturday, the rescuers having given priority to getting the children out first.

When they emerged, they only had a few bruises and mild hypothermia to show for an experience that started when a wall of snow hurtled into the hotel just after 5.30 pm on Wednesday.

The survivors were all in or close to the hotel entrance hall waiting for transport home when it struck, sending them flying.

"When I came round we were on the ground, bruised but not really hurt," Georgia said. "It was pitch black, the only thing we could hear were the voices of the others near us, echoing."

With the help of mobile phone lights before the batteries ran out, the survivors established they were spread across four separate pockets of varying sizes.

'Trapped In A Box'

One of them, Francesca Bronzi was alone, unable to stand because of a giant wooden beam. "It was very claustrophobic but the worst thing was the thirst, I was constantly wetting my lips with ice and dirty snow," she said.

Another collapsed beam had come to a halt centimetres above the head of eight-year-old Gianfilippo Parete, according to his mother Adriana, who was next to him.

"I hugged him and I think we stayed like that for the rest of the time, day and night."

Gianfilippo's sister, Ludovica, 6, was with two boys in the adjacent remains of the hotel games room.

"Fortunately the mamma could hear her daughter and help her to stay calm," Georgia said.

The student said her partner had emerged as the leader of the group, singing whenever spirits flagged.

"He never had any doubts, he kept us all up. He gave the group strength," she said. "I just felt like I was trapped in a box. I cried a lot."

As well as the nine pulled out, there were two survivors who were outside the hotel when the avalanche struck at nightfall on Wednesday. Five bodies have been recovered so far.

The snow slide followed a series of powerful earthquakes in the region earlier in the day and some 36 hours of heavy snow.

A prosecutor has opened an investigation into the disaster with hypothetical charges of manslaughter and causing a disaster.

It remains at a preliminary stage but questions are mounting over whether the construction of the luxury spa should have been authorised and if it should have been evacuated before the avalanche struck.