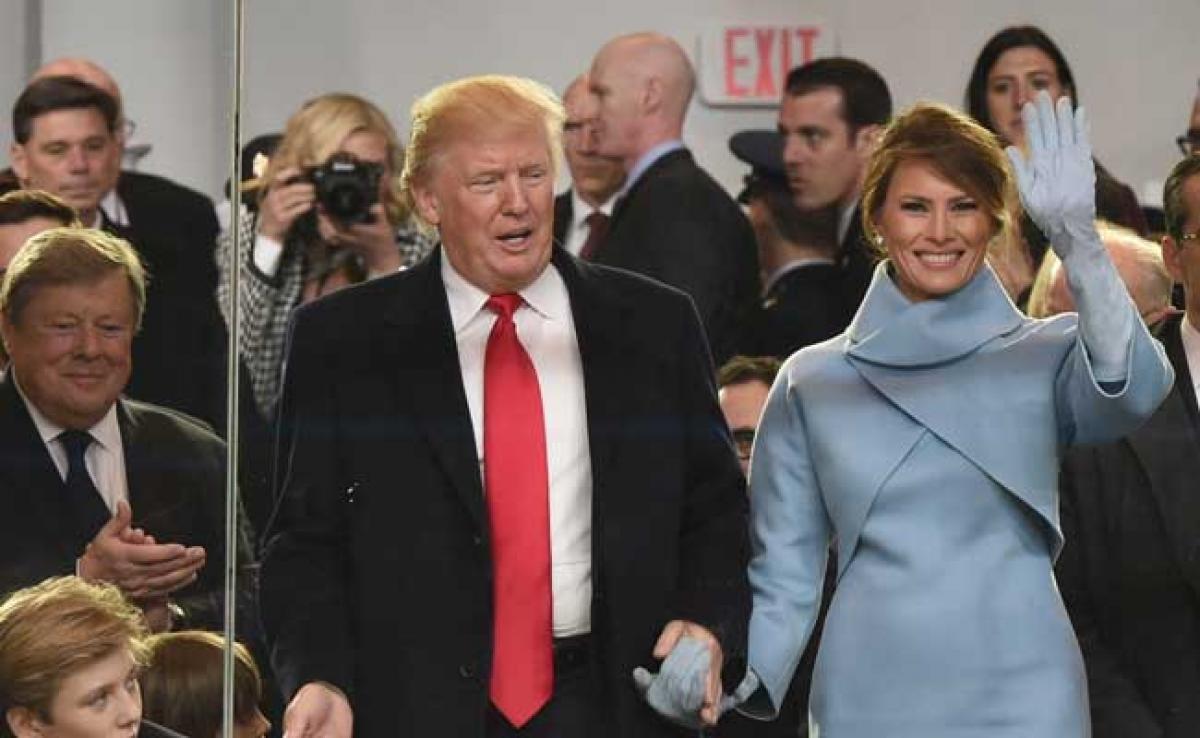 Two weeks after her husband\'s inauguration, questions are mounting about what kind of first lady Melania Trump will be.The 46-year-old former model wowed the crowds at his swearing-in ceremony and inaugural balls dressed in Ralph Lauren powder blue and a vanilla crepe, ticking fashion boxes and suggesting that the mother of one was anxious to step up to her new role.

Two weeks after her husband's inauguration, questions are mounting about what kind of first lady Melania Trump will be.The 46-year-old former model wowed the crowds at his swearing-in ceremony and inaugural balls dressed in Ralph Lauren powder blue and a vanilla crepe, ticking fashion boxes and suggesting that the mother of one was anxious to step up to her new role.

Since then, however, she has not been seen at official events, is not living in the White House and is still putting together her staff.

She was last spotted by the president's side at an inter-faith church service on January 21 before making the reported 90-minute commute home to New York by helicopter, plane and motorcade the following day. With no imminent plans to move to Washington, she's said to want the couple's 10-year-old son Barron to stay at his school at least until the end of the academic year.

On Tuesday, she was conspicuously absent when Trump announced his Supreme Court pick. Vice President Mike Pence and Neil Gorsuch brought their wives. Even Trump's sons Donald Jr. and Eric made the journey from New York.

On Wednesday, the president's daughter Ivanka accompanied him to Delaware to honor a fallen Navy SEAL. Unlike her stepmother, Ivanka has already moved from New York with her husband, White House advisor Jared Kushner.

Asked in December if he would be lonely rattling around the White House on his own, then president-elect Donald Trump told Fox News: "No, I'll be working."

Never in modern times -- when Americans are accustomed to having visible and active first ladies -- has a president's wife not moved straight to Washington.

"Certainly in that time we haven't seen a phenomenon such as this where the first lady delays for at least several months moving into the White House," said Katherine Jellison, history professor at Ohio University.

Melania's absence has prompted speculation in the media, which Trump's senior advisor Stephen Bannon has likened to "the opposition" for its tough, critical coverage of the president's campaign and his first two weeks in office.

"Whither Melania Trump?" 12 days without a public sighting," CNN said. "Where is Melania?" asked The Washington Post. "Separate Lives," ran a headline in celebrity magazine US Weekly.

The White House announced Wednesday that the first lady had appointed a chief of staff -- Lindsay Reynolds, who previously served there under George W. Bush.

"I am putting together a professional and highly experienced team which will take time to do properly," the first lady said in the statement.

"The first lady often sets out her policy agenda in March or April, complementing and reinforcing the 100-days agenda of the president," said Connecticut College government professor MaryAnn Borrelli.

But beyond admiring Michelle Obama and Jacqueline Kennedy and mentioning a potential campaign against cyber bullying, Melania has given little indication so far of what kind of first lady she wants to be.

Since Trump assumed office, her official Facebook and Twitter accounts have issued just one update -- on January 21 -- proclaiming her "deeply honored" to serve.

Just one appointment to her staff has been revealed besides Reynolds: longtime friend and New York event planner Stephanie Winston Wolkoff as senior adviser. Other positions such as press and social secretaries have yet to be filled.

The absence is not helping her lackluster approval ratings, partly a by-product of her husband's deep unpopularity among half the electorate. She was also mocked during the campaign for a major speech that plagiarized Michelle Obama.

But Borelli believes her unpopularity is not entirely unusual.

"I think that first ladies often enter the White House with a mix of support and suspicion and then the job is -- because they do public outreach -- how to capitalize on the support and manage suspicion," she said.

Michelle Obama, the first African-American first lady, and Clinton and Eleanor Roosevelt, who both defied the meek housewife stereotype, also came in for heavy criticism particularly at the start.

Others say it is time for an independent first lady who reflects reality in the 21st century, when few American women are defined by their husbands.

Should Melania continue to keep a low profile, future generations may credit her as a modernizer who broke free from the confines of her position.

"It may lower expectations for the next woman," Jellison said. "She won't feel that she has to be the perfect American wife and mother role model."