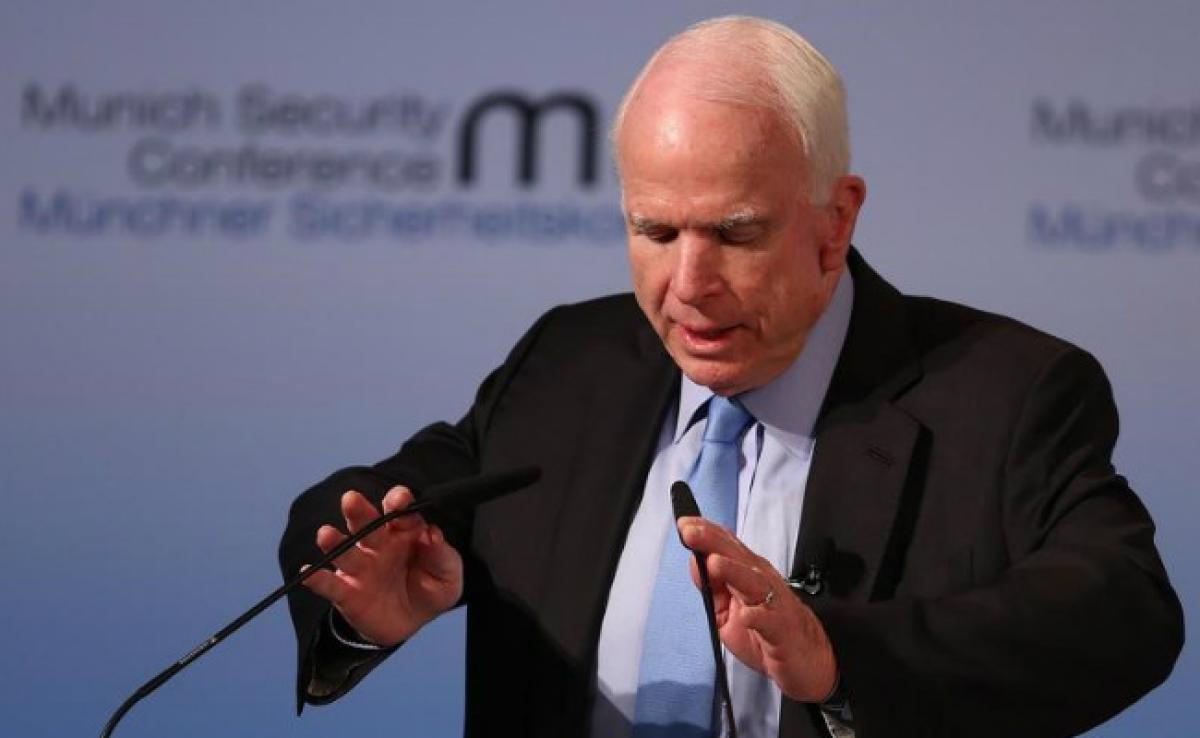 Republican Senator John McCain broke with the reassuring message that US officials visiting Germany have sought to convey on their debut trip to Europe, saying on Friday that the administration of President Donald Trump was in \"disarray\".

Republican Senator John McCain broke with the reassuring message that US officials visiting Germany have sought to convey on their debut trip to Europe, saying on Friday that the administration of President Donald Trump was in "disarray". McCain, a known Trump critic, told the Munich Security Conference that the resignation of the new president's security adviser Michael Flynn over his contacts with Russia reflected deep problems in Washington. "I think that the Flynn issue obviously is something that shows that in many respects this administration is in disarray and they've got a lot of work to do," said McCain, even as he praised Trump's defence secretary.

"The president, I think, makes statements (and) on other occasions contradicts himself. So we've learned to watch what the president does as opposed to what he says," he said.

European governments have been unsettled by the signals sent by Trump on a range of foreign policy issues ranging from NATO and Russia to Iran, Israel and European integration.

The debut trip to Europe of Trump's Defence Secretary Jim Mattis and Secretary of State Rex Tillerson, to a meeting of G20 counterparts in Bonn, went some way to assuaging concerns as they both took a more traditional US position.

But Trump is wrestling with a growing controversy at home about potential ties between his aides and Russia, which he dismissed on Thursday as a "ruse" and "scam" perpetrated by a hostile news media.

Mattis made clear to allies, both at NATO in Brussels and in Munich that the United States would not retreat from leadership as the European continent grapples with an assertive Russia, wars in eastern and southern Mediterranean countries and attacks by terrorists.

US Vice President Mike Pence will address the Munich conference on Saturday with a similar message of reassurance.

Pence will say that Europe is an "indispensable partner" for the United States, a senior White House foreign policy adviser told reporters.

Mattis told a crowd that included heads of state and more than 70 defence ministers that Trump backed NATO.

"President Trump came into office and has thrown now his full support to NATO. He too espouses NATO's need to adapt to today's strategic situation for it to remain credible, capable and relevant," Mattis said.

Mattis said the United States and its European allies had a shared understanding of the challenges ahead. Trump has alarmed allies by expressing admiration for Russian President Vladimir Putin.

Mattis, however, has spoken out strongly against Russia while in Europe. After talks with NATO allies in Brussels on Thursday, he said that he did not believe it would be possible to collaborate militarily with Moscow, at least for now.

The Europeans may need more convincing that Washington stands with it on a range of security issues.

"There is still a lot of uncertainty," Sebastian Kurz, Austria's foreign minister, told reporters. "The big topic in Munich is looking to the USA to see which developments to expect next."

European intelligence agencies have warned that Russia is also seeking to destabilise governments and influence elections across Europe with cyber-attacks, fake news and propaganda and by funding far-right political parties.

"We should be under no illusions about the step-change in Russian behaviour over the last couple of years, even after Crimea," British Defence Minister Michael Fallon said, referring to Moscow's 2014 annexation of the Ukrainian peninsula.

"We have seen a step-change in Russian military aggression, but also in propaganda, in misinformation and a succession of persistent attacks on Western democracies, interference in a whole series of elections including ... the United States."

NATO Secretary-General Jens Stoltenberg held talks with Russian Foreign Minister Sergei Lavrov in Munich, seeing progress on encouraging Moscow to be more open about its military exercises that the alliance says are unpredictable.

Russia says it is the Western alliance, not Moscow, that is destabilising Europe by sending troops to its western borders.

"We have different views," Stoltenberg said of the crisis in Ukraine, where the West accuses the Kremlin of arming separatist rebels in a conflict that has killed 10,000 people since April 2014. Russia says the conflict is a civil war.

In the latest incident, Lithuanian prosecutors have opened a criminal investigation into a false report of rape by German soldiers stationed there on a NATO mission to deter Russia.

Mattis, without explicitly citing the case, rallied to the defence of German forces as he spoke in the German city of Munich. "I have great respect for Germany's leadership in Europe - and for the ethical performance of your troops on the battlefield," he said.

US intelligence agencies concluded last year that Russia hacked and leaked Democratic emails during the election campaign as part of an effort to tilt the vote in Trump's favour.

McCain acknowledged concern in Europe and beyond that America was "laying down the mantle of global leadership" and cited global trends he found disturbing, including hardening resentment toward immigrants and an unwillingness to separate truth from lies.

McCain urged the forum not to give up on the United States.