Homeland Security Secretary Kirstjen Nielsen says all options are being considered to stop people getting into the US illegally.

America says "everything is on the table" to keep migrants out as it unveiled the first phase of a wall at the Mexico border.

Homeland Security Secretary Kirstjen Nielsen said the administration was looking at all legal options to keep migrants out.

Her comments come as a caravan of migrants made up of thousands fleeing violence and poverty in Central America is making its way through Mexico.

Ms Nielsen was speaking as she stood next to a newly constructed 30ft (9m) fence in California which the administration says is the first phase of the border wall.

The Pentagon has approved a request for extra troops at the southern border, expected to total at least 800, although the figure could be as many as 1,000. 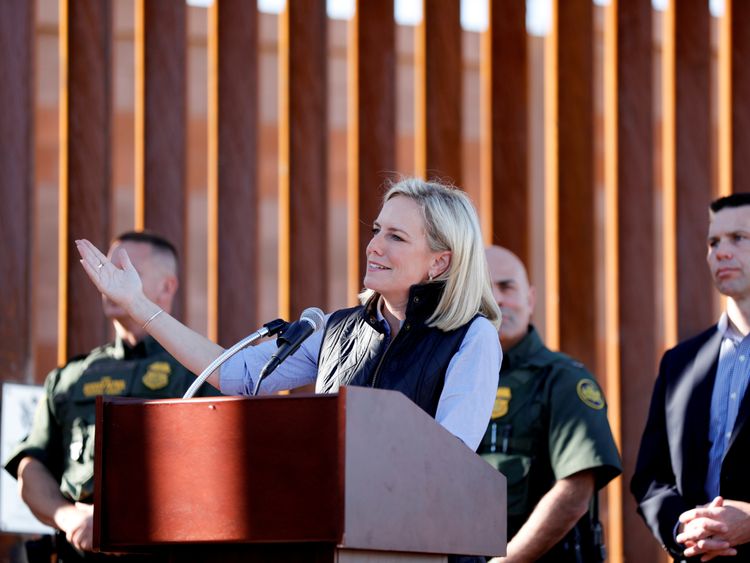 The White House is looking at new border security measures, including one plan that would use the same mechanism as Donald Trump's travel ban to block migrants from seeking asylum in the US.

Mr Nielsen said: "We are looking at every possible way within the legal construct that we have to make sure that those who don't have the legal right to come to this country do not come in."

"We need personnel to secure the border. And we need laws that work for the American people. I refuse to believe that this is too complex for Congress to solve, they must address this crisis."

The president has intensified his focus on immigration as the 6 November midterm elections get closer.

The caravan of migrants is about 1,000 miles away but dwindling in size.

Mr Trump said this week: "I called up the military. We're not letting them in, they ought to go back now because we're not."

Any steps the president takes to curtail the rights of migrants to seek asylum are certain to be met with legal challenges.

Andrea Guerrero, executive director of Alliance San Diego, said it would be "a very drastic action that would have disastrous practical implications for our asylum obligations, for our moral and legal obligations".

She added: "We know that civil rights attorneys are preparing to litigate right now.

"They're preparing to litigate right away. I don't know if Trump cares if he wins the litigation.

"He wants to score political points ... it's all part of the same political ploy to stoke fear for political reasons and build more walls."

Details about the military operation at the border have also been revealed.

The Defence Department said the mission is authorised from 30 October to 15 December and will operate in border areas of California, Arizona and Texas.

The Pentagon said the military will be involved in erecting barricades and fencing and helicopters and planes would be deployed to move Border Patrol personnel, medical teams and patients.

However, troops will not be used to detain migrants.

Earlier this year Mr Trump ordered the deployment of the National Guard to the US-Mexico border after a surge in illegal border crossings.

There are currently about 2,000 National Guard troops on the border.