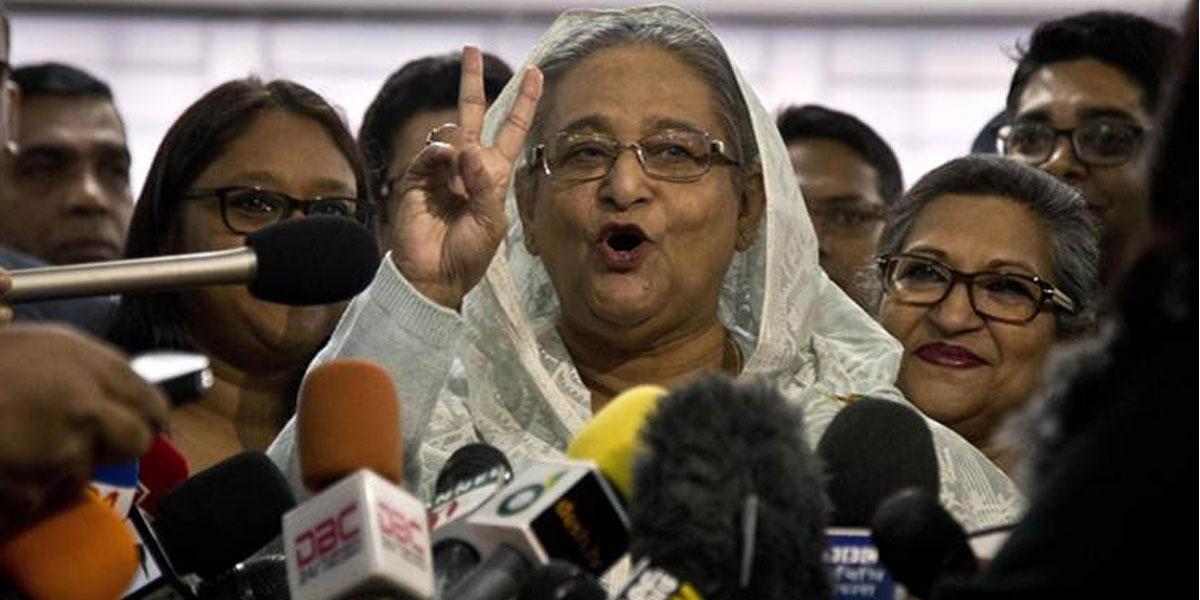 Bangladesh Prime Minister Sheikh Hasina is set to return for a new term in office as her party, Awami League AL, has registered a landslide victory, Bangladeshs Election Commission said on Monday

Hasina would become Prime Minister for an unprecedented fourth term after AL secured win in 259 constituencies of the 300-seat parliament, according to results released by the Election Commission for 298 seats, bdnews24.com reported.

Election Commission (EC) Secretary Helal Uddin Ahmed has been announcing the results from the commission headquarters in Dhaka since the voting ended at 4 p.m. (Bangladesh time) on Sunday.

The ruling party is followed by its key ally the Jatiya Party at 20.

The BNP (Bangladesh Nationalist Party), a key ally of the Opposition alliance, has suffered a massive rout with just five seats plus two of its allies in the Jatiya Oikya Front.

Early indications of the massive margin of the victory for the Awami League were visible in the race contested by Bangladesh's prime minister for the Gopalganj-3 seat.

According to the official results announced by EC Secretary Ahmed, Hasina received 229,529 votes from the 246,514 voters in the constituency.

The paddy sheaf candidate for the Gopalganj-3 set was S.M. Zilani, who received only 123 votes. The turnout at Gopalganj for the race was 93 per cent, the EC secretary said.

Bangladesh went to the polls between 8 a.m. and 4 p.m. on Sunday. Voting was suspended at 22 polling centres due to irregularities.

At least 17 people were killed in election violence in 11 districts across the country.

The Jatiya Oikya Front rejected the election results and called upon the Election Commission to hold new elections under a neutral government.

The alliance chief Kamal Hossain said they had received similar reports of voting frauds from nearly all voting centres in the country.

"You must cancel this election right away," Kamal urged the EC. "We reject the so-called results and demand a new election under a neutral government."

At least 31 candidates running independently or as candidates of the BNP, Jamaat-e-Islami or Jatiya Oikya Front pulled out of the race midway.

The Bangladesh government has made sure the election is participated by all parties, Gowher Rizvi, international affairs adviser to the prime minister, has told foreign observers.

In a post-election briefing at Hotel Sonargaon, he claimed the government has also ensured free access for all voters and maintained a "very calm" environment for polls.

"I'm pleased because we have kept the promises we made," he said.