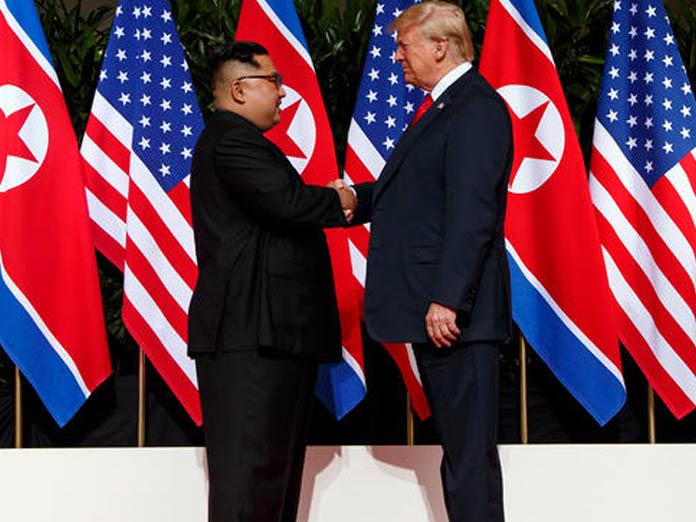 Despite Kim's determination for another meeting with Trump, the two remain at odds over fundamental issues. Experts say a major sticking point is what denuclearization steps Kim should take to move forward stalled nuclear diplomacy and what rewards Trump should provide to push Kim to take those measures. The Korean Central News Agency said Kim received a letter from Trump from a North Korean envoy who met the U.S. president in Washington last week. After meeting with Kim's envoy, top lieutenant Kim Yong Chol, Trump said that he and Kim Jong Un will probably meet around the end of February but did not say exactly when and where the summit would take place.

Thursday's report said Kim expressed satisfaction over his envoy's meeting with Trump and spoke highly of the U.S. president for "expressing his unusual determination and will for the settlement of the issue with a great interest in the second summit." "We will wait with patience and in good faith and, together with the US, advance step by step toward the goal to be reached by the two countries," Kim was quoted as saying. Kim also "set forth tasks and orientation for making good technical preparations for the second (North Korea)-US summit high on the agenda," according to KCNA. Nuclear diplomacy has been stuck since Kim and Trump met in Singapore last June for their first summit, which ended with a vague denuclearization pledge by Kim that his government had previously used when it called for the withdrawal of the 28,500 US troops in South Korea.

A summit accord also stated that the United States and North Korea will commit to establishing new relations and join their efforts to build a lasting and stable peace regime on the Korean Peninsula. The strongest step Kim could promise to take for a second summit may be abandoning his long-range missile program targeting the US mainland. That step, if realized, would trigger a strong backlash from many in South Korea and Japan, which are still placed in the striking distance of North Korea's short- and medium-range missiles. In return, Kim is seeking to get UN sanctions on his government lifted and better relations with the United States to try to revive his country's moribund economy to pave the way for a prolonged rule by his family, experts say.

North Korea observers say Vietnam is likely a venue for a second summit but there has been no official confirmation. The nuclear diplomacy has replaced fears of war caused by Kim's series of high-profile nuclear and missile tests in 2017 that were followed by his exchanges of crude insults and threats of total destruction with Trump. Kim has so far suspended nuclear and missile tests, dismantled North Korea's nuclear testing site and parts of its rocket engine test facility and took conciliatory measures like releasing American detainees. The North now says it's time for the U.S. to come up with reciprocal measures.

But satellite footage indicate North Korea is still running its main nuclear complex, raising a question on why it's producing nuclear materials if it is truly committed to denuclearization. US officials want North Korea to take more significant steps such as a declared accounting of its nuclear weapons program for future inspections. The North has rejected that, saying such a declaration would be like providing coordinates for U.S. military strikes on its nuclear facilities.