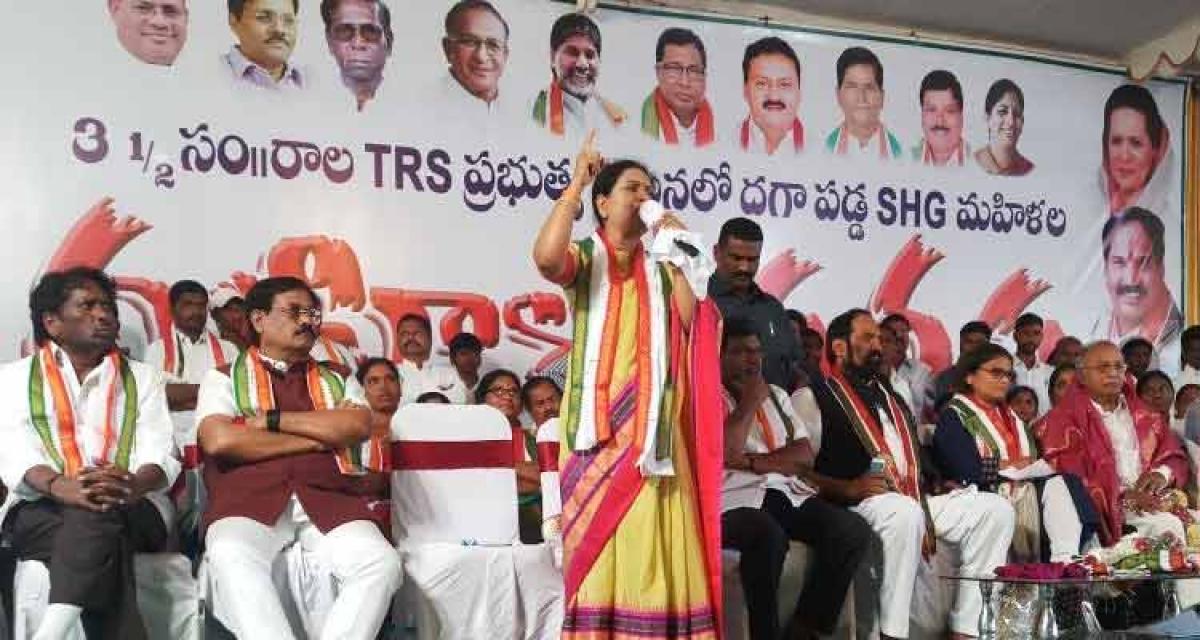 Wanaparthy: Reiterating the Congress Party’s resolve to come back to power in 2019, Uttam Kumar Reddy, Telangana Pradesh Congress Committee (TPCC) Chief while talking at the ‘Mahila Garjana Meet’ at Padmavati Srinivasa Function hall in Wanaparthy district on Monday said that the Telagnaan Rashtra Samithi (TRS) government during its three and half year rule has done nothing for the welfare of the women Self Help Groups (SHGs). As a result, more than 20 lakh SHGs in the State have come on to the roads due to the apathy of the State government.

“During the past more than three years of TRS rule has miserably failed to protect the interests of women and SHGs in the State. The interest free and pavala vaddi schemes to provide loans to SHGs is no where seen. The Abhaya Hastam pension scheme is not properly implemented, overall more than 20 lakh SHGs have come on to roads in state,” said Uttam Kumar, while addressing a huge gathering of Women groups at Mahila Garjana meet.

The TPCC Chief said that if voted back to power in 2019, he would ensure that each woman under the Self-Help groups would get a minimum pension of Rs 1,000 under Abhaya hastam, so that the women can lead a dignified life after crossing 60 years.

Speaking on the occasion, D K Aruna, Congress MLA from Gadwal, said that the TRS government has been deceiving all communities in the State by giving false promises. “Before coming to power, KCR said he would make a ‘dalit’ candidate as Chief Minister, but after coming to power he did not keep his word and instead he himself became the CM of Telangana and deceiving all sections of society during the past three years of TRS rule,” said D K Aruna.

Speaking on the occasion before the programme began, Chinna Reddy local Congress MLA from Wanaparthy said, during the Congress rule the government had introduced Velugu Pension and Insurance Scheme for the (Rural and Urban) SHG women in November 2009 to provide income security in their old age.

The aim was to provide security to all enrolled SHG women with dignity in their old age, however during the TRS rule this scheme is seen no where an all the women under self help groups have come on to the roads as the government has done grave injustice by not implementing the welfare schemes for the women development.

Sushmita Dev, All India Congress Women’s President said the women groups have been deprived of their rights both at the State and Center under the TRS and NDA government respectively. Soon the Congress party will come to power in 2019 and Rahul Gandhi will become the next Prime Minister. “The KCR government has done nothing for the welfare of the women in the State and has even not spared the women for ‘Batukamma Sarees’and did business in the name of distribution of free sarees to women folks,” she remarked.