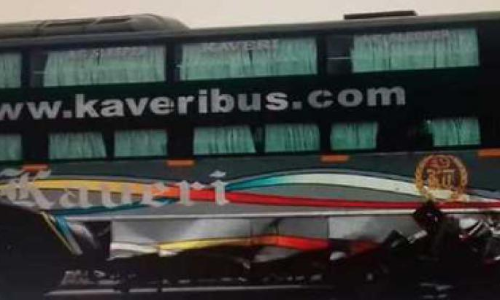 Barakathgudem (Suryapet): Two persons died and six others injured when the car in which they were travelling was hit by an oncoming Volvo bus on NH-65 at Bharakathgudem of Munagala mandal in the district in the early hours of Friday.

The deceased were identified as car driver Atthikonda Raju (40) and Chanupalli Uma Maheshwari (64) of Miyapur of Hyderabad. According to the police, the ill fated Mahindra car bearing number TS07FE2430, was going towards Vijayawada from Hyderabad, while the Volvo was coming from Vijayawada to Hyderabad. Police believe that the car driver fall asleep and lost control over the vehicle.

Kodad DSP B. Sudharshan Reddy, Munagala CI Shivashankar Goud visited the spot and enquired about the accident. Dead bodies were shifted to Government hospital in Kodad for autopsy. Munagala SI Nagesh registered a case and took up investigation.