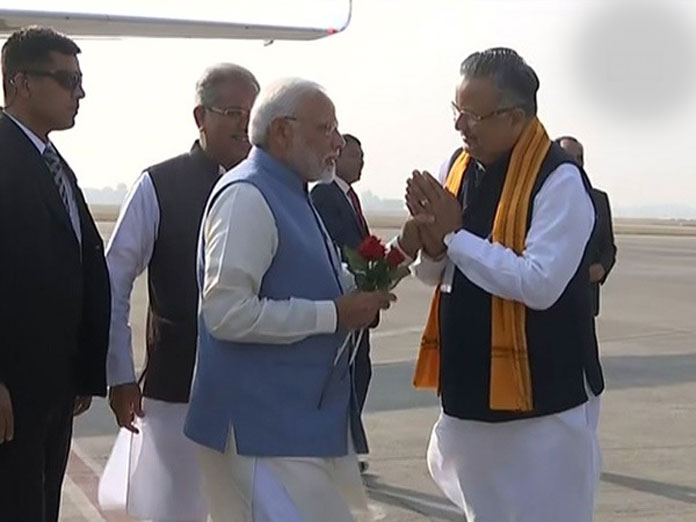 Speaking to the media, Baghel said, "He (Prime Minister) has come here for the first time after our government was formed, so I came to welcome him. He congratulated me on becoming the chief minister."

Meanwhile, Singh told the media that the Prime Minister will make one more brief stop at Chhattisgarh on his way back from Odisha.

"He is on his way to Odisha for the inauguration of some projects, when he comes back from there we will come again. It was a very short meeting, yet he asked us about how we all are," said Singh.

Prime Minister Modi will flag off a train at Bolangir station which will run up to Bicchupali (15.5)km station, which is newly constructed between Khurda Road-Bolangir line.

Informing about the event, the Prime Minister had tweeted on Monday: "There is something special about Odisha, that draws me to the state so often! Tomorrow I will be in Balangir to inaugurate and lay the foundation stones for several development works, which will have a transformative impact on Odisha's progress."

Other projects that would be inaugurated include a 28.3-acre Multi Modal Logistics (MMLP) Jharsuguda, Balangir-Bicchupalli new rail line, electrification of 813 km of Jharsuguda-Vizinagaram and Sambalpur-Angul lines, doubling of Barpali-Dungaripali and Balangir-Deogaon road line among others.