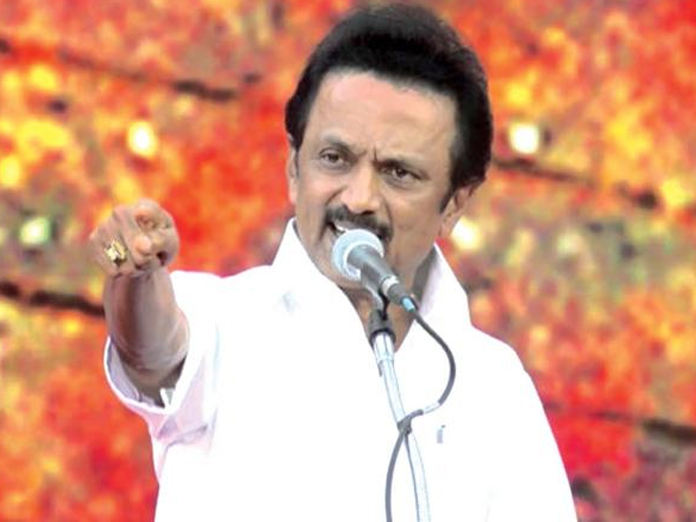 DMK President MK Stalin today said the only goal of all the secular parties is to throw out the Narendra Modi government at the Centre in the 2019 Lok Sabha elections, which will be the countrys second freedom struggle and only option to save the nation by defeating BJP with an united opposition front

KOLKATA: DMK President MK Stalin today said the "only goal" of all the secular parties is to throw out the Narendra Modi government at the Centre in the 2019 Lok Sabha elections, which will be the "country's second freedom struggle" and only option to save the nation by defeating BJP with an united opposition front.

"It is heartening to see a number of parties aligned here on the stage. Our only goal is to send the BJP government packing and save the country," he said addressing the Brigade Parade Ground rally that saw tens of thousands of people attending to hear the Opposition.

Taking a swipe at Prime Minister Narendra Modi, the Tamil leader, who delivered his speech at the rally through a Bengali interpreter, said PM Modi was badmouthing and attacking the opposition leaders in his speeches as he is scared of the alliance.

"PM Modi used to say that he does not have enemies or opposition parties. But nowadays he is starting all his speeches by criticising and badmouthing the opposition. He is scared to see the opposition forces unite. He has understood that his defeat is confirmed," Mr Stalin claimed.

"Before coming to power, he (Modi) used to say that he would bring development to the people of the nation but after becoming the Prime Minister he is only bringing despair and dismay to people," he said.

Mr Stalin said the country's age-old concept of unity in diversity was under threat from the Modi government which was trying to foist one religion, one culture idea which has to be resisted at all cost.

He said the unity of the non-BJP parties displayed in Kolkata meant that "Modi's defeat and our victory is certain".

Mr Stalin also accused the Modi government of working for and at the behest of the corporates and turning the central government into a private limited company.

Hailing Mamata Banerjee for bringing the Opposition on one stage ahead of the 2019 Lok Sabha polls, Mr Stalin said Bengalis and Tamils have played significant roles in India's freedom struggle and would continue to do so in future.

Former Union Minister Yashwant Sinha, who severed his ties with Bharatiya Janata Party in 2018, said at his age he wanted nothing in life but the ouster of the PM Modi government for which the entire opposition should unite.

He suggested all the opposition parties should field one common candidate against the BJP across the country so that the NDA government could be "thrown out lock, stock and barrel".

Another former Union Minister Arun Shourie attacked Prime Minister Narendra Modi for his demonetisation decision that set the economy backwards and inflicted misery on common man and for messing up with a simple idea like the Goods and Services Tax, making it cumbersome.