6 jawans feared dead in avalanche in Himachal, rescue on standby 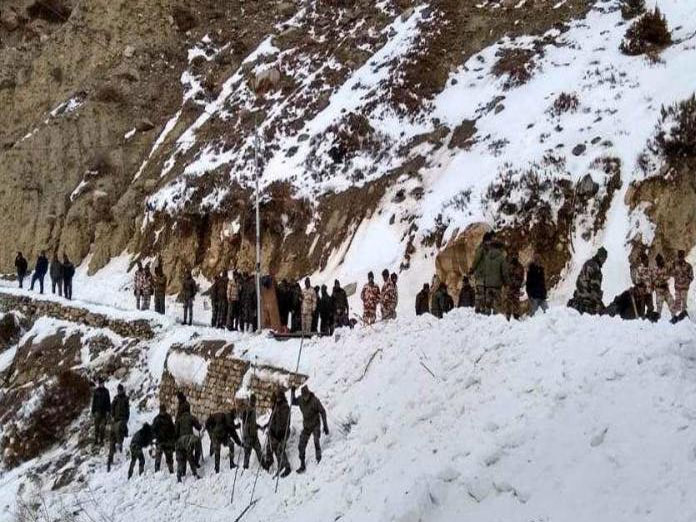 A glacier slid at Shipki La Thursday morning where rescue parties are on standby to restart the operation to search for five Army jawans trapped in the snow avalanche in Himachal Pradeshs Kinnaur district, officials said

Rescue parties are waiting for the weather to clear to restart the operation.

​Shimla: A glacier slid at Shipki La Thursday morning where rescue parties are on standby to restart the operation to search for five Army jawans trapped in the snow avalanche in Himachal Pradesh's Kinnaur district, officials said.

Six jawans of the 7 JAK Rifles of the Army unit—four from Himachal Pradesh, one each from Uttarakhand and Jammu and Kashmir—are feared dead in the avalanche that occurred near Shipki La border outpost around 11 am on Wednesday.

The search and rescue operation has been adversely affected as Pooh witnessed 4 to 5 inches snowfall whereas more snowfall occurred at Shipki La and adjoining areas Wednesday night, she said, adding it has been raining heavily at the spot since morning.

However, men moved to continue the search operation, she added.

The body of one of the Army jawans was recovered on Wednesday itself, but there was no trace of five others.

The deceased jawan was identified as Rakesh Kumar (41) of Ghumarpur village in Bilaspur district of Himachal Pradesh. Five Indo-Tibetan Border Police (ITBP) jawans were also injured in the avalanche.

When the avalanche descended rapidly down from the mountainside near Shipki La, 16 Army and ITBP jawans had gone towards the border post from Namagya in order to repair a damaged water supply line.

While eight ITBP jawans were on the hill overseeing the water supply line, the Army jawans were standing down the hill, Army sources said.

Six Army jawans were buried alive. One of them was rescued, but he succumbed to injuries subsequently.