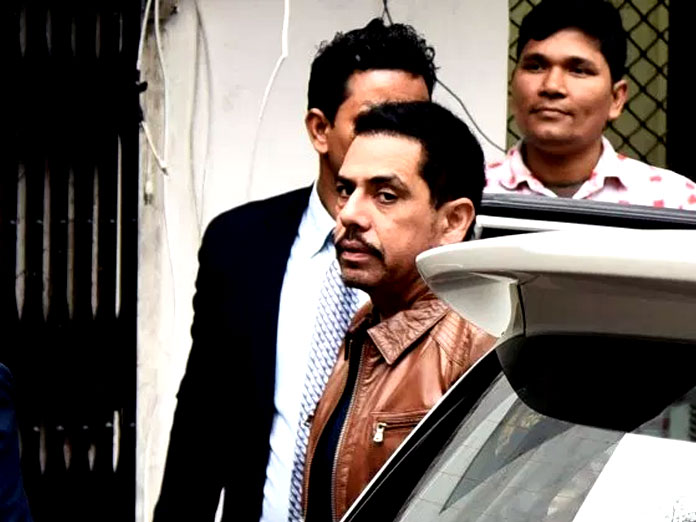 The Enforcement Directorate ED on Wednesday questioned Robert Vadra, the brotherinlaw of Congress President Rahul Gandhi, for the seventh time in an ongoing money laundering probe for having overseas assets worth 19 million pounds

New Delhi: The Enforcement Directorate (ED) on Wednesday questioned Robert Vadra, the brother-in-law of Congress President Rahul Gandhi, for the seventh time in an ongoing money laundering probe for having overseas assets worth 1.9 million pounds.

Vadra was questioned at the agency's Jamnagar office located at India Gate's mouth in Central Delhi for over five hours by the investigating officers, who began his grilling around 11 a.m, minutes after he deposed.

The Directorate officials said that Vadra arrived at the agency's office at 10.40 a.m and was questioned till 5.47 p.m.

The investigators recorded Vadra's statement and confronted him with the documents the ED has as evidence in the case related to his ownership of overseas assets in London.

According to the ED, Vadra's properties are located at 12, Bryanston Square in London and are allegedly owned by the businessman in a "benami" way. The agency has informed a Delhi court about the various new properties in London that belong to Vadra. These include two houses -- one worth 5 million pounds and the other valued at 4 million pounds -- six flats and other assets.

On December 7, the Directorate had raided several of Vadra's properties in Delhi-NCR and Bengaluru.

His first appearance before the ED earlier this month acquired political overtones after Priyanka accompanied him to the investigating agency's office and picked him up after questioning another time.

Vadra had also deposed before the ED twice in Jaipur in connection with another money-laundering case related to an alleged land scam in Bikaner. His mother Maureen, too, was questioned by the agency once during the same deposition.