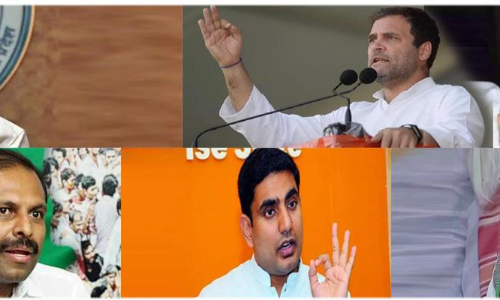 TRS 'B team' of RSS and BJP, says Rahul Gandhi in Telangana

Kosgi: Mounting a scathing attack on Telangana's ruling TRS, Congress president Rahul Gandhi called it the "B team" of the RSS and BJP. ......Read more

In KCR's home turf Gajwel, it's development vs 'unreachable' CM

Gajwel/Siddipet: With poll campaign at its peak in Telangana, voters in caretaker chief minister K Chandrashekar Rao's home turf Gajwel seem to be divided between the talks of development by the ruling party and Opposition's allegations of an "unreachable" head of the government. ......Read more

AICC chief Rahul Gandhi took potshots at caretaker chief minister K Chandrasekhar Rao saying that the state was left debt-ridden by the TRS which began the government with a surplus budget of Rs 17,000 crore. TRS has left a per capita debt of Rs 60,000 on each citizen of the state. .......Read more

AP chief minister N Chandrababu Naidu said that he has not interfered in the developments being made in Telangana. He also wondered as to why the caretaker chief minister KCR criticising him.......Read more

Lokesh To Contest From Kuppam?

Andhra Pradesh Chief Minister and TDP President N Chandrababu Naidu is reportedly planning to field his son and IT minister N Lokesh from his Kuppam assembly constituency from where the Telugu Desam chief hailed and elected MLA. .......Read more

Purulia: West Bengal Chief Minister Mamata Banerjee on Wednesday said her party Trinamool Congress will contest a number of Lok Sabha seats in the neighbouring states of Jharkhand, Odisha and Assam in the 2019 General Elections........Read more