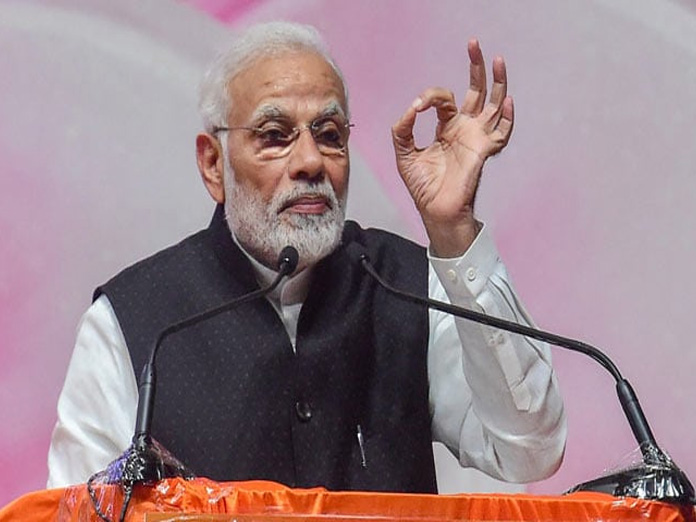 Addressing a gathering in Surat, Mr Modi said, India witnessed instability for 30 years due to hung parliaments as not party received a majority This...

Addressing a gathering in Surat, Mr. Modi said, “India witnessed instability for 30 years due to hung parliaments as not party received a majority. This had stalled the country’s development. And the country even regressed on some parameters due to that situation.” Mr.Modi has said well as the country missed a lot of development activities in the past due to failures of taking strong decisions that would have catapulted the country into the developmental path.

But such situation should not be repeated as the people must choose either the Congress or the BJP at the Centre as both of them are the true national parties. A coalition government sans the BJP or the Congress cobbled up to rule the country would mean and fetch only anarchy and chaotic state. So, Mr. Modi’s exhortation for a stable and strong government at the centre is always welcome and only such government can take the nation forward in the development path.

This refers to small news report "BJP accuses Tharoor of ridiculing Kumbh" (The Hans P 13, 31 Jan). There is nothing wrong on what Shashi Tharoor has said about the way the UP Chief Minister Yogi Adityanath convened a cabinet meeting in Allahabad (renamed as Prayagraj) to use the opportunity to take a dip in Sangam and got photos splashed in all media including your paper (THI 30 Jan).

No one is objecting to the ministers and other leaders taking a dip during Khumb, the way they were using the event is nothing but a "religious slur". How can we see a minister in undergarments pushing each other to appear in photo with CM.

If the UP Chief Minister wants to take his government at the door steps of the electorate why not hold a Cabinet meeting in a remote village and at least in that process they would get some attention. What would be Ms Irani's reaction if Muslim CM conducts a meeting in mosque during Ramzan etc.or Punjab CM conducts cabinet meeting in Harmandir Sahib. It is high time those who have taken oath in the name of Constitution should keep away from religion in their official engagement.

The Honourable President of India has presented a very beautiful progress report of our beloved Prime Minister Narendra Modi Ji 's achievements in the past four- and- a- half years period. The statistics presented are so astounding, that even the opposition cannot contradict. For instance, the Jandhan Yojana, Gas connections to lakhs of poor families, Power connectivity to all the villages, Infrastructure developments, Swachh Bharat movement, Image of Bharat world over etc. are most recordable achievements in a short span of four and half years, which were never taken care of during the previous 60 years of UPA government.

The Honourable President spoke for more than an hour clearly, passionately, and to the point. He almost covered all the development activities taken up by the NDA government during the past 56 months. It is very unfortunate a senior parliamentarian like Ghulam Nabi Azad sat hands closely tied up, afraid of clapping unconsciously while the achievements were rolled one after another by the President.

Politics apart, at such times the true leaders and states men should appreciate good progress openly and daringly declared by the ruling party. P M Modi has kept up the promise made by him at the time of taking over the charge of the leadership of the nation, by presenting a brilliant achievement card. Congratulations to him.

Opposition may pick up some holes and play down the progress, while approving a motion of thanks to the President's address, but the progress is quite visible and undeniable.

The period of reservations was originally contemplated in the Constitution based on the state of some castes and tribes was over long ago, as it was meant for only a decade from the commencement of the Constitution of the Indian Union. It is necessary to shift the basis for reservations to economic conditions and physically special challenged. The Modi Government is proceeding on right lines. Otherwise deplorable things have been taking place to derive advantage based of reservation based on castes of fathers of children.

There is nothing on record to show that the ground situation had undergone any material change following the status quo obtained in March 2003 in the Ayodhya Ram Janmabhoomi case so as to warrant submission of application by the present Centre in appealing to the Apex Court to return the "superfluous" excess area acquired under the Ayodhya Act of 1993. Pat comes the intriguing thought of "the General Elections around the corner" even for an impartial and dispassionate mind. It is for the alert electorate to see through the game of a few selected politicians employing the communal card for reaping the harvest at the ensuing hustings.

A stand-up comedian in lockdown