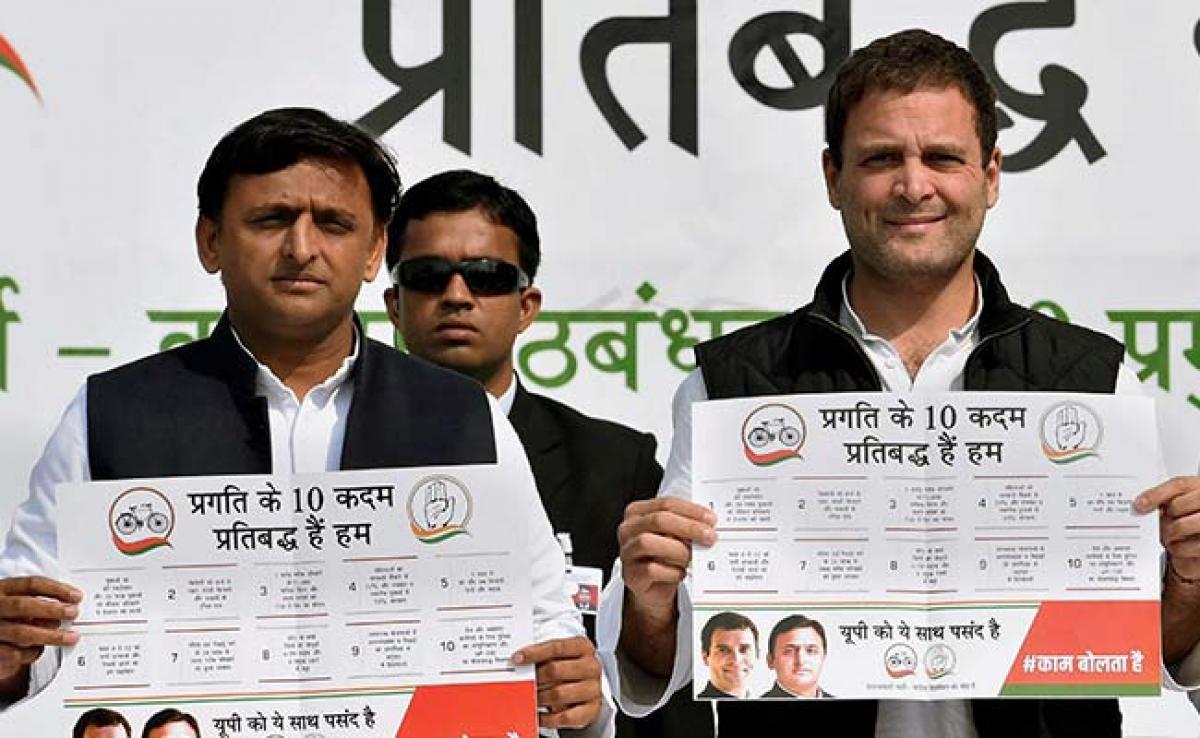 Seeking to win over 300 of the 403 Assembly seats in Uttar Pradesh, Samajwadi Party president Akhilesh Yadav and Congress vice president Rahul Gandhi today jointly released ten commitments on which their alliance will work on coming to power.

Seeking to win over 300 of the 403 Assembly seats in Uttar Pradesh, Samajwadi Party president Akhilesh Yadav and Congress vice president Rahul Gandhi today jointly released ten commitments on which their alliance will work on coming to power.

The two leaders at a press conference released the commitments which include major promises made by the two parties to the people of the state in their manifestos.

The list of commitments include distribution of free smartphones to youth, employment guarantee through skill development to 20 lakh youths, loan waiver to farmers, cheap power and proper remuneration for crops.

It also commits to provide Rs 1,000 monthly pension to one crore poor families and one time food at Rs 10 to urban poor, 33 per cent reservation to women in government jobs and 50 per cent reservation in panchayat and local bodies elections besides power, road and water to every village in five years.

Free cycles to all girl students of class IX to XII and meritorious students, free homes to over 10 lakh poor dalit and backward families, four lane roads connecting all districts and metro in six main cities also figure in the list.

For the minorities and backwards, it promises representation in ratio to their population in all the welfare schemes as also police modernisation for making it more effective and phased expansion of dial-100 scheme.

These commitments include the promises made by Rahul Gandhi during his state-wide Kisan Yatra, such as loan waiver to farmers and reduction of power tariff for them - a long time demand of Congress.

"At least Samajwadi people practically give shape to what they say but some others only do 'mann ki baat' but 'kaam ki baat nahi karte'... they do not say in rallies and in districts what are the achievements of their government," Mr Yadav said.

"(They say) two families have entered into an alliance... I will say that two youths have come together it is an alliance of SP and Congress...," he stressed in response to a jibe at Prime Minister Narendra Modi's comment in this regard.

"These are ten steps to development worked out by the two parties on which Congress and SP will work on coming to power in future," Mr Yadav added.