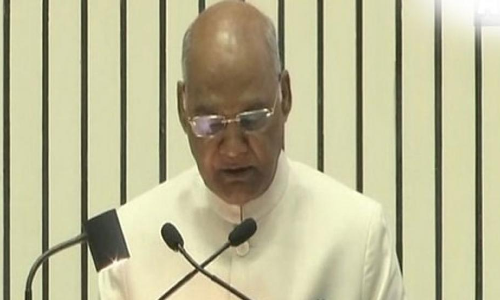 President Ram Nath Kovind on Sunday said that the various banking scandals that jolted India over the past few years represent a breach of faith of honest citizens of the country.

New Delhi: President Ram Nath Kovind on Sunday said that the various banking scandals that jolted India over the past few years represent a breach of faith of honest citizens of the country.

Inaugurating the platinum jubilee celebrations of the Institute of Chartered Accountants of India (ICAI) here, President Kovind said, "When banking scandals take place, when large borrowers abscond and leave their banks in the lurch - or, as in the case of Satyam some years ago, when promoters themselves embezzle funds and carry out fraud - it represents a breach of faith.

It amounts to a betrayal of not only corporate ethics but of honest fellow citizens and of our collective value system," President Kovind opined.He further said that the White collar crimes don't leave behind a "smoking gun but broken hearts and a shaken confidence,"Terming charted accountants as "watchdogs of public trust," the President said, "In many respects, a tax system is only as complicated as you want to make it. As professionals, it is your legitimate right to advise your clients on tax planning."

"Adherence to a fair taxation system is much more than merely providing revenue to the government. Taxes are what we pay to get social benefits in the form of public goods and services, health and education facilities, better infrastructure, law and order, and secure borders. It is crucial that this responsibility is shared by the widest possible number of citizens - whether they pay taxes directly or indirectly," he added.

He also stressed that there is a "fine line between intelligent tax planning and tax dodging and tax evasion".