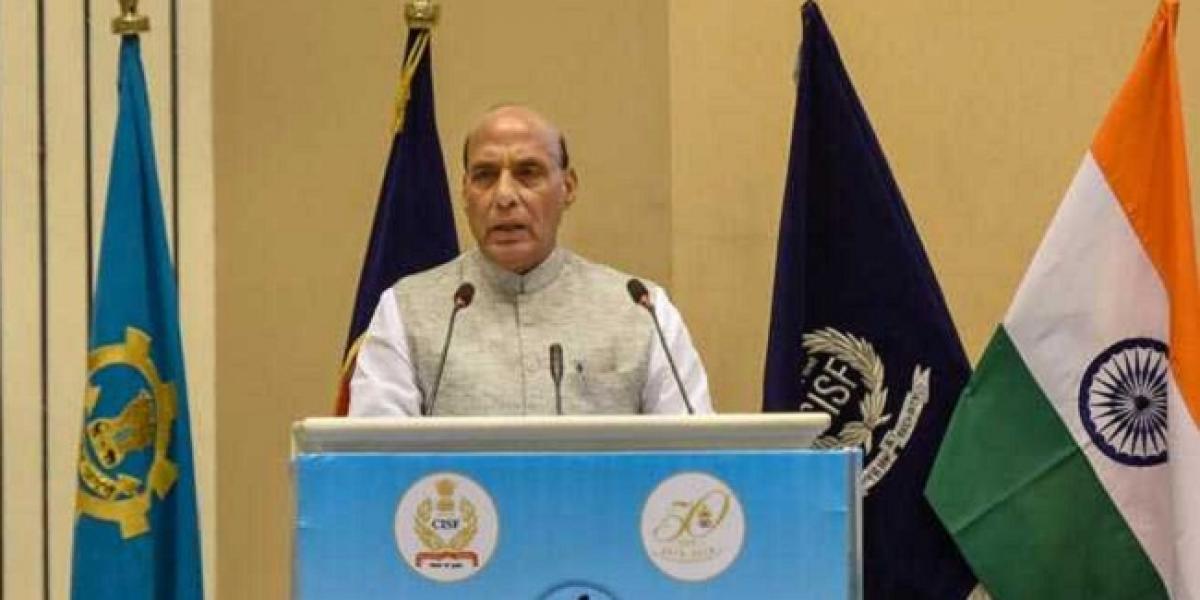 Recalling the 2009 underwear bomber, who attempted to blow up an AmsterdamDetroit flight midair, Home Minister Rajnath Singh said on Tuesday terrorists are pushing their limits and underpants to attack global civil aviation operations

Rajnath Singh also said closer to home, ensuring security of about 40 small airports and heliports in India is a subject that cannot be "ignored".

"The civil aviation sector is highly sensitive and high profile in nature. It also gets worldwide attention when hit by any attack. Often these incidents have geopolitical ramifications," he said after inaugurating a two-day seminar on 'international aviation security' in New Delhi.

"The case of the shoe bomber in 2001, the use of liquid explosives in London in 2006 and the case of the underwear bomber in Amsterdam in 2009, clearly indicate that terrorists are pushing the limits and even their underpants to hit the aviation sector," Singh said.

On Christmas Day in 2009, Umar Farouk Abdulmutallab tried to blow up a commercial plane for the al-Qaeda but was badly burned when a bomb sewn into his underwear failed to detonate fully on-board a flight from Amsterdam to Detroit. Farouk earned the nicknames of underwear bomber and Christmas Day bomber.

Security agencies such as the CISF should undertake "untiring and sincere efforts to maintain fool-proof security" at airports, which are thronged by lakhs of travellers daily, Singh said.

The seminar is being organised by the Central Industrial Security Force (CISF), a federal force that guards 60 civil airports at present. It is being attended by delegates from 18 countries and several airlines.

Civil aviation security continues to be an extremely challenging task as the sector remains an important target for terror outfits. Terrorists always look for opportunities to draw maximum attention and media coverage, he said.

"There are 40 other operational airports and heliports under the regional connectivity scheme (RCS) in India, which are guarded by airport security units carved out from the respective state police forces.

"The strength of any claim is determined by the strength of its smallest unit, therefore the security of the smaller airports should never be ignored," Singh said.

Officials said while there has been a talk of deploying CISF personnel at airports under the RCS or UDAN scheme, no "final decision" has been taken.

These facilities continue to be guarded by state police forces, which are not as professional as the central force, in rendering aviation security duties, they said.

The minister said the attacks on the Brussels and Istanbul airports (in 2016) have shown the vulnerability of airports, especially from the city side, and it highlights new threats to aviation facilities.

"There have been several terror attacks on the aviation sector till date, the most devastating being the September 2001 attack (in the US) that shocked the world..." he said.

Rajnath Singh said it was essential to innovate and think new to meet evolving threats to aviation security.

"We have come up with an adequate set of infrastructure at airports which commensurate with the increased number of air passengers. But, there are still many challenges and vulnerabilities. Therefore, we need perspective planning, more international cooperation and better coordination," he said.

"We should adhere to stricter implementation of internationally agreed guidelines and norms, and induction of updated advanced technology in all airports would enhance our security capabilities,” Singh said.

"The governments and aviation agencies have to increasingly think about newer methods to tackle conventional and unconventional threats," he added.

The home minister spoke about some legal measures taken by his government to ensure safety in the aviation sector.

"We have upgraded our anti-hijacking mechanisms since 1999 by refining our strengths and rectifying our weaknesses. Keeping the threat of aircraft hijacking by terrorists in mind, India has reviewed its preparedness towards such exigencies," he said.

Singh said the CISF has undertaken untiring and sincere efforts to maintain fool-proof security at the airports under its guard.

The 9/11 attack (2001 attack on the twin towers in the US) and the Kandahar (hijack of an Indian Airlines flight in 1999) have taught us many lessons, he said.

The CISF was entrusted with airports security in 2000, in the aftermath of the Kandahar incident.

The force was raised in 1969 and has about 1.45 lakh personnel in its ranks at present. About 22,000 of the total CISF personnel are deployed for airport security duties across the country.

The minister advised all stakeholders, especially the Bureau of Civil Aviation Security (the national aviation security regulator) and the CISF, to infuse new technology for aviation security and ensure a judicious blend of trained human resources and modern security infrastructure.