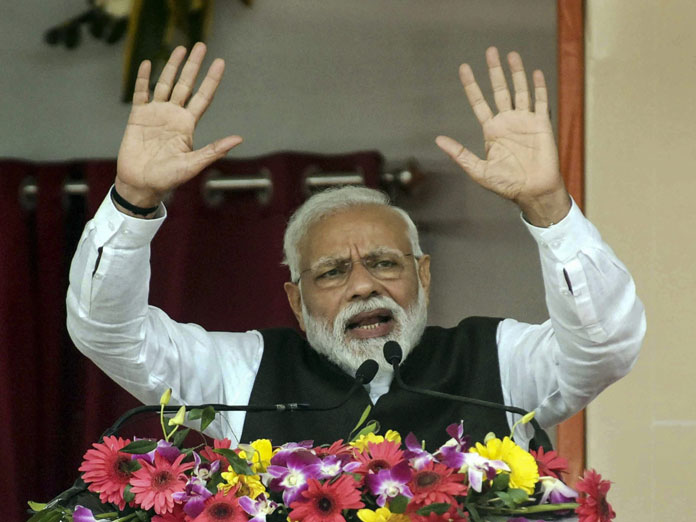 The Prime Minister said he shared the nation's outrage. "To the people who have gathered here, I would like to say the fire that is raging in your bosoms is in my heart too," he said.

More than 40 personnel of the Central Reserve Police Force died on Thursday as a suicide bomber of the Pakistan-based terror group Jaish-e Mohammed rammed a car, filled with explosives, into a 78-vehicle convoy.

The resulting explosion had ripped apart one bus and hit another, spreading metal debris and human remains over a 100-metre radius on the national highway. There have been repeated demands for appropriate action from the shocked nation.

The Prime Minister, who launched many projects in Begusarai, paid tributes to two of the martyred jawans who hailed from the state. "I salute and pay my tributes to Sanjay Kumar Sinha and Ratan Kumar Thakur," the PM said.

"To the large number of people who have gathered here, I would like to say the fire that is raging within you is in my heart as well," Modi said, evoking a thunderous response from the crowd. Modi has promised that the sacrifices of the jawans at Pulwama "will not go in vain". Union Minister Arun Jaitley, too, tweeted that the terrorists "will be given unforgettable lesson for their heinous act".

Nitish Kumar and deputy CM Sushil Kumar Modi also expressed hopes of a strong response from India in the wake of the Pulwama attack.
India's response against the attack has been two-pronged so far.

On the one hand, efforts are on to isolate Pakistan diplomatically, on the other, allowances made for Pakistan in terms of trade have been scrapped. India has withdrawn the Most Favoured Nation or MFN status to Pakistan and imposed 200 per cent customs duties on goods from across the border.

Over 40 nations have condemned the terror attack and New Delhi has asked the international community to support naming JeM chief Masood Azhar as a "UN designated terrorist".

At a rally in Assam, BJP chief Amit Shah said, "The sacrifice of the soldiers of CRPF won't go in vain. This time the Central government is not Congress... It is Modi's government, which will not compromise on issue of national security... the BJP government has given answers for terrorism".