No change in stance on Article 35A: J&K govt 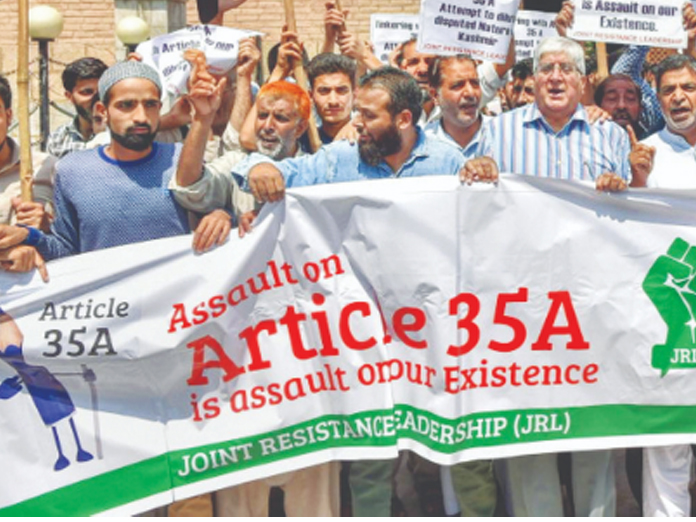 Putting all speculation to rest, the Jammu and Kashmir administration on Sunday said its stance remained unchanged that only an elected government would be able to take a stand on Article 35A before the Supreme Court, which is hearing a bunch of petitions challenging its validity

‘Only elected govt can take stand’

Jammu: Putting all speculation to rest, the Jammu and Kashmir administration on Sunday said its stance remained unchanged that only an elected government would be able to take a stand on Article 35-A before the Supreme Court, which is hearing a bunch of petitions challenging its validity.

Addressing a press conference, senior bureaucrat Rohit Kansal, who has been designated as the chief spokesperson of the Governor's administration, said, "The stand of the state government on the request of deferment of hearing on Article 35A in the Supreme Court remains the same as requested by them on February 11."

Rohit was replying to a question on whether there was a change in the stand of the Governor's administration on the contentious issue. Kansal also urged the people of the state not to pay heed to rumours and get panicky on the basis of unsubstantiated and exaggerated pieces of information which were in circulation.

"In the past few days several rumours have been circulated and panic messages disseminated. Most of these have been based on unsubstantiated or exaggerated pieces of information," he said.

The Jammu and Kashmir government's counsel had sought permission from the Supreme Court for circulating a letter among the contesting parties for adjourning the upcoming hearing on the pleas challenging the constitutional validity of Article 35A, which provides special rights and privileges to the natives of the state, saying there was no "elected government" in the state. The apex court is scheduled to hear the petitions challenging Article 35A soon.

A bench comprising Chief Justice Ranjan Gogoi and Justice Sanjiv Khanna was told by lawyer Shoeb Alam, representing the Jammu and Kashmir government, on February 11 that he was seeking its nod to circulate the letter among the parties for getting the scheduled hearing deferred.

"On the day of listing, the undersigned (Alam) shall be requesting for an adjournment in the matter since presently, there is no elected government in the state of Jammu and Kashmir and the state is under President's Rule. "The present matter involves a sensitive issue regarding a challenge to Article 35A of the Constitution of India.

A short reply has been filed by the state of Jammu and Kashmir in the lead matter 'We the Citizens' and notices have not been issued on the other petitions. It will therefore be requesting that the matter may kindly be heard when an elected government is in place," the state government said in the letter.

Article 35A, incorporated in the Constitution by a 1954 Presidential Order, accords special rights and privileges to the citizens of Jammu and Kashmir and bars people from outside the state from acquiring any immovable property in the state.

It denies property rights to a woman who marries a person from outside the state. The provision, which leads to such women from the state forfeiting their right over property, also applies to their heirs.

The bench is hearing several petitions, including the one filed by NGO 'We the Citizens' through lawyer Barun Kumar Sinha. Several petitions, including those by political parties like the National Conference and the CPI-M, were also filed in the Supreme Court in support of Article 35A that also empowers the state Assembly to define "permanent residents" for bestowing special rights and privileges to them.

The state government, while defending the article, had cited two verdicts of the constitution benches of the Supreme Court in 1961 and 1969, which had upheld the powers of the President, under Article 370(1)(d) of the Constitution, to pass constitutional orders.