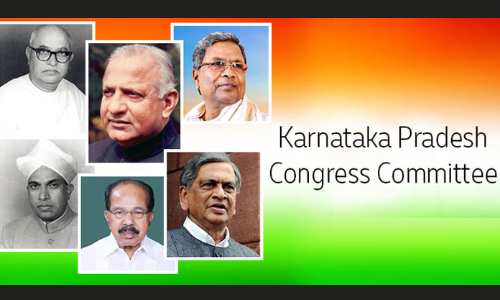 The Election Committee of Karnataka Congress that met on Thursday has finalised a panel of names for 15 out of 28 Lok Sabha seats, which will be submitted to the partys screening committee

Bengaluru: The Election Committee of Karnataka Congress that met on Thursday has finalised a panel of names for 15 out of 28 Lok Sabha seats, which will be submitted to the party's screening committee.

The meeting attended by several senior Congress leaders, including CLP leader Siddaramaiah, state President Dinesh Gundu Rao and Deputy Chief Minister G Parameshwara, among others, discussed the seats where party and its coalition partner JD(S) do not have sitting MPs, other than Shivamogga.

"Sitting MP constituencies of both INC & JD(S) were not discussed. For the remaining 15 seats, excluding Shivamogga, a panel of names were finalised for submission to the screening committee, which is to convene on 11th March in New Delhi," Gundu Rao said in a tweet.

Currently, BJP holds 16 Lok Sabha seats in Karnataka, Congress 10 and JD(S) 2. In the meeting, at least three names have been finalised for each of the constituencies, sources said.

Candidate for Shivamogga constituency was not discussed in the meeting as the seat is likely to go to JD(S). JD(S) supremo H D Deve Gowda has already said that former MLA Madhu Bangarappa will be the coalition candidate from Shivamogga.

Madhu, son of former Chief Minister S Bangarappa, had lost to BJP chief B S Yeddyurappa's son B Y Raghavendra during the recent by-polls, after Yeddyurappa vacated the seat to contest in the May 2018 assembly elections.

The Congress has gone ahead with the process, even as the meeting on seat-sharing between Congress president Rahul Gandhi and JD(S) chief Deve Gowda on Wednesday at Delhi was inconclusive.

However, scaling down his party's demand, Gowda on Wednesday had asked Congress to allot at least 10 out of the 28 Lok Sabha seats to his party. The JD(S) had earlier demanded that it be given 12 seats to contest.

After his meeting with Rahul Gandhi, Gowda had said, the seat-sharing agreement is likely to be finalised shortly and will be announced by March 10.

Sharing of seats from old Mysuru region is expected to be an acid test for both the parties, as the JD(S) considers it its bastion, and the Congress has its sitting members from most of the seats there.

There is pressure from within the Congress not to cede too many seats to JD(S), especially the 10 seats where the party has sitting MPs.